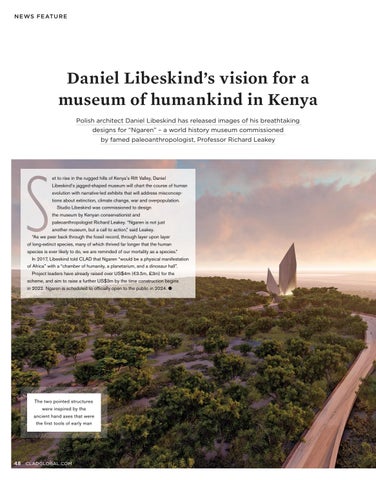 et to rise in the rugged hills of Kenya’s Rift Valley, Daniel Libeskind’s jagged-shaped museum will chart the course of human evolution with narrative-led exhibits that will address misconceptions about extinction, climate change, war and overpopulation. Studio Libeskind was commissioned to design the museum by Kenyan conservationist and paleoanthropologist Richard Leakey. “Ngaren is not just another museum, but a call to action,” said Leakey. “As we peer back through the fossil record, through layer upon layer of long-extinct species, many of which thrived far longer that the human species is ever likely to do, we are reminded of our mortality as a species.” In 2017, Libeskind told CLAD that Ngaren “would be a physical manifestation of Africa” with a “chamber of humanity, a planetarium, and a dinosaur hall”. Project leaders have already raised over US$4m (€3.5m, £3m) for the scheme, and aim to raise a further US$3m by the time construction begins in 2022. Ngaren is scheduled to officially open to the public in 2024. ●