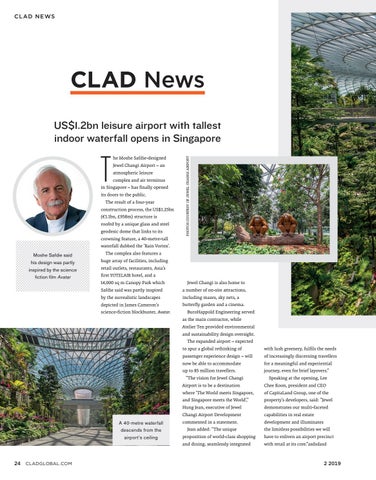 in Singapore – has finally opened its doors to the public. The result of a four-year construction process, the US$1.25bn

(€1.1bn, £958m) structure is roofed by a unique glass and steel geodesic dome that links to its crowning feature, a 40-metre-tall

Jewel Changi is also home to

a number of on-site attractions,

by the surrealistic landscapes

including mazes, sky nets, a

butterfly garden and a cinema.

BuroHappold Engineering served as the main contractor, while Atelier Ten provided environmental and sustainability design oversight. The expanded airport – expected to spur a global rethinking of

now be able to accommodate

for a meaningful and experiential

up to 85 million travellers.

journey, even for brief layovers.”

“The vision for Jewel Changi

A 40-metre waterfall descends from the airport’s ceiling

with lush greenery, fulfils the needs

Speaking at the opening, Lee

Airport is to be a destination

where ‘The World meets Singapore,

of CapitaLand Group, one of the

and Singapore meets the World’,”

commented in a statement.

the limitless possibilities we will

have to enliven an airport precinct

with retail at its core.”asdsdasd