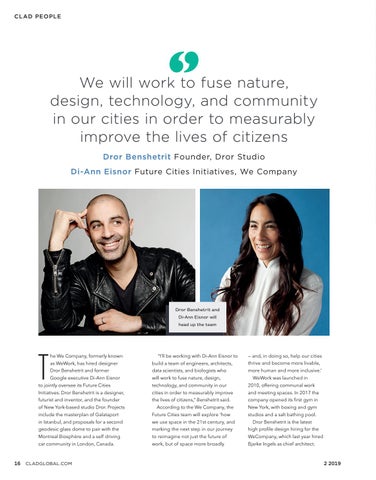 We will work to fuse nature, design, technology, and community in our cities in order to measurably improve the lives of citizens Dror Benshetrit Founder, Dror Studio Di-Ann Eisnor Future Cities Initiatives, We Company

he We Company, formerly known

as WeWork, has hired designer

build a team of engineers, architects,

will work to fuse nature, design,

to jointly oversee its Future Cities

Initiatives. Dror Benshetrit is a designer, futurist and inventor, and the founder

data scientists, and biologists who

— and, in doing so, help our cities thrive and become more livable,

more human and more inclusive.’ WeWork was launched in

technology, and community in our

the lives of citizens,” Benshetrit said.

company opened its first gym in

cities in order to measurably improve According to the We Company, the

and meeting spaces. In 2017 the New York, with boxing and gym studios and a salt bathing pool.

include the masterplan of Galataport

Future Cities team will explore ‘how

geodesic glass dome to pair with the

marking the next step in our journey

high profile design hiring for the

work, but of space more broadly

in Istanbul, and proposals for a second Montreal Biosphère and a self driving car community in London, Canada.

we use space in the 21st century, and to reimagine not just the future of

Dror Benshetrit is the latest