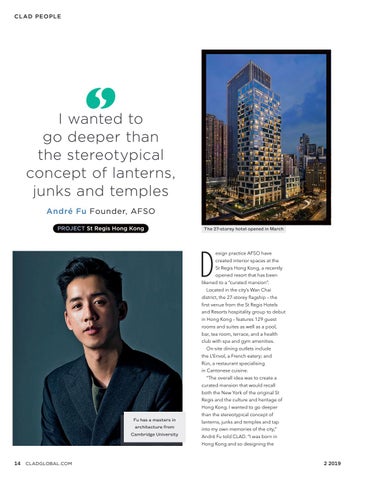 The 27-storey hotel opened in March

created interior spaces at the

St Regis Hong Kong, a recently opened resort that has been

likened to a “curated mansion”.

Located in the city’s Wan Chai

district, the 27-storey flagship – the

rooms and suites as well as a pool,

the L’Envol, a French eatery; and Rùn, a restaurant specialising in Cantonese cuisine.

“The overall idea was to create a

curated mansion that would recall

both the New York of the original St

Regis and the culture and heritage of Hong Kong. I wanted to go deeper Fu has a masters in architecture from Cambridge University

than the stereotypical concept of

lanterns, junks and temples and tap into my own memories of the city,”

André Fu told CLAD. “I was born in Hong Kong and so designing the