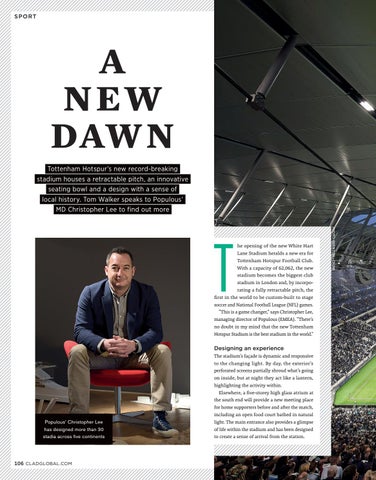 he opening of the new White Hart Lane Stadium heralds a new era for Tottenham Hotspur Football Club. With a capacity of 62,062, the new stadium becomes the biggest club stadium in London and, by incorporating a fully retractable pitch, the first in the world to be custom-built to stage soccer and National Football League (NFL) games. “This is a game changer,” says Christopher Lee, managing director of Populous (EMEA). “There’s no doubt in my mind that the new Tottenham Hotspur Stadium is the best stadium in the world.”

The stadium’s façade is dynamic and responsive to the changing light. By day, the exterior’s perforated screens partially shroud what’s going on inside, but at night they act like a lantern, highlighting the activity within. Elsewhere, a five-storey high glass atrium at the south end will provide a new meeting place for home supporters before and after the match, including an open food court bathed in natural light. The main entrance also provides a glimpse of life within the stadium and has been designed to create a sense of arrival from the station.