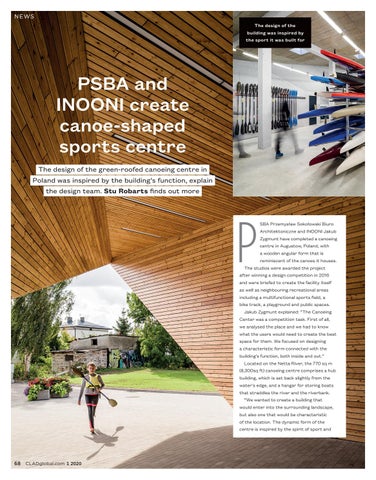 PSBA and INOONI create canoe-shaped sports centre The design of the green-roofed canoeing centre in Poland was inspired by the building’s function, explain the design team. Stu Robarts finds out more

SBA Przemysław Sokołowski Biuro Architektoniczne and INOONI Jakub Zygmunt have completed a canoeing centre in Augustow, Poland, with a wooden angular form that is reminiscent of the canoes it houses.

The studios were awarded the project

after winning a design competition in 2016 and were briefed to create the facility itself as well as neighbouring recreational areas including a multifunctional sports field, a bike track, a playground and public spaces. Jakub Zygmunt explained: “The Canoeing Center was a competition task. First of all, we analysed the place and we had to know what the users would need to create the best space for them. We focused on designing a characteristic form connected with the building’s function, both inside and out.” Located on the Netta River, the 770 sq m (8,300sq ft) canoeing centre comprises a hub building, which is set back slightly from the water’s edge, and a hangar for storing boats that straddles the river and the riverbank. “We wanted to create a building that would enter into the surrounding landscape, but also one that would be characteristic of the location. The dynamic form of the centre is inspired by the spirit of sport and