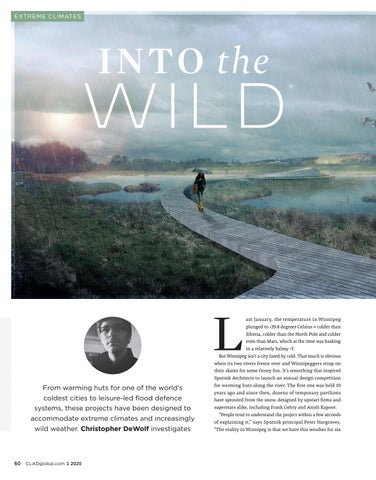 WILD L From warming huts for one of the world’s coldest cities to leisure-led flood defence systems, these projects have been designed to accommodate extreme climates and increasingly wild weather. Christopher DeWolf investigates

ast January, the temperature in Winnipeg plunged to -39.8 degrees Celsius – colder than Siberia, colder than the North Pole and colder even than Mars, which at the time was basking in a relatively balmy -7. But Winnipeg isn’t a city fazed by cold. That much is obvious when its two rivers freeze over and Winnipeggers strap on their skates for some frosty fun. It’s something that inspired Sputnik Architects to launch an annual design competition for warming huts along the river. The first one was held 10 years ago and since then, dozens of temporary pavilions have sprouted from the snow, designed by upstart firms and superstars alike, including Frank Gehry and Anish Kapoor. “People tend to understand the project within a few seconds of explaining it,” says Sputnik principal Peter Hargraves. “The reality in Winnipeg is that we have this weather for six