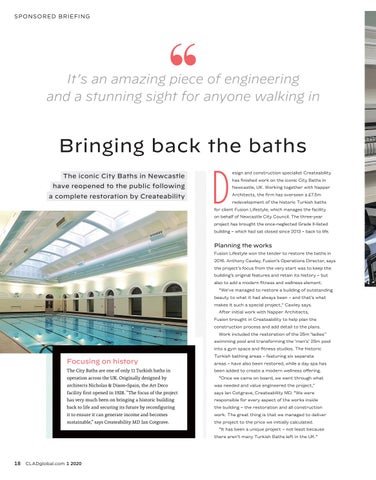 esign and construction specialist Createability has finished work on the iconic City Baths in Newcastle, UK. Working together with Napper Architects, the firm has overseen a £7.5m redevelopment of the historic Turkish baths

for client Fusion Lifestyle, which manages the facility on behalf of Newcastle City Council. The three-year project has brought the once-neglected Grade II-listed building – which had sat closed since 2013 – back to life.

Planning the works Fusion Lifestyle won the tender to restore the baths in 2016. Anthony Cawley, Fusion’s Operations Director, says the project’s focus from the very start was to keep the building’s original features and retain its history – but also to add a modern fitness and wellness element. “We’ve managed to restore a building of outstanding beauty to what it had always been – and that’s what makes it such a special project,” Cawley says. After initial work with Napper Architects, Fusion brought in Createability to help plan the construction process and add detail to the plans. Work included the restoration of the 25m ‘ladies’’ swimming pool and transforming the ‘men’s’ 25m pool into a gym space and fitness studios. The historic

The City Baths are one of only 11 Turkish baths in operation across the UK. Originally designed by architects Nicholas & Dixon-Spain, the Art Deco facility first opened in 1928. “The focus of the project has very much been on bringing a historic building back to life and securing its future by reconfiguring it to ensure it can generate income and becomes sustainable,” says Createability MD Ian Cotgrave.

been added to create a modern wellness offering.

areas – have also been restored, while a day spa has “Once we came on board, we went through what was needed and value engineered the project,” says Ian Cotgrave, Createability MD. “We were responsible for every aspect of the works inside the building – the restoration and all construction work. The great thing is that we managed to deliver the project to the price we initially calculated. “It has been a unique project – not least because there aren’t many Turkish Baths left in the UK.“