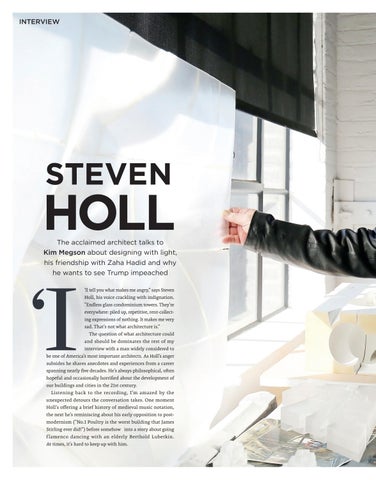 The acclaimed architect talks to Kim Megson about designing with light, his friendship with Zaha Hadid and why he wants to see Trump impeached

’ll tell you what makes me angry,” says Steven Holl, his voice crackling with indignation. “Endless glass condominium towers. They’re everywhere: piled up, repetitive, rent-collecting expressions of nothing. It makes me very sad. That’s not what architecture is.” The question of what architecture could and should be dominates the rest of my interview with a man widely considered to be one of America’s most important architects. As Holl’s anger subsides he shares anecdotes and experiences from a career spanning nearly five decades. He’s always philosophical, often hopeful and occasionally horrified about the development of our buildings and cities in the 21st century. Listening back to the recording, I’m amazed by the unexpected detours the conversation takes. One moment Holl’s offering a brief history of medieval music notation, the next he’s reminiscing about his early opposition to postmodernism (“No.1 Poultry is the worst building that James Stirling ever did!”) before somehow into a story about going f lamenco dancing with an elderly Berthold Lubetkin. At times, it’s hard to keep up with him.