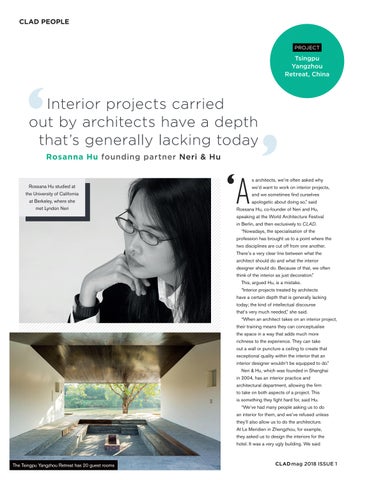 Rossana Hu studied at the University of California at Berkeley, where she met Lyndon Neri

s architects, we’re often asked why we’d want to work on interior projects, and we sometimes find ourselves apologetic about doing so,” said

Rossana Hu, co-founder of Neri and Hu, speaking at the World Architecture Festival in Berlin, and then exclusively to CLAD. “Nowadays, the specialisation of the profession has brought us to a point where the two disciplines are cut off from one another. There’s a very clear line between what the architect should do and what the interior designer should do. Because of that, we often think of the interior as just decoration.” This, argued Hu, is a mistake. “Interior projects treated by architects have a certain depth that is generally lacking today; the kind of intellectual discourse that’s very much needed,” she said. “When an architect takes on an interior project, their training means they can conceptualise the space in a way that adds much more richness to the experience. They can take out a wall or puncture a ceiling to create that exceptional quality within the interior that an interior designer wouldn’t be equipped to do.” Neri & Hu, which was founded in Shanghai in 2004, has an interior practice and architectural department, allowing the firm to take on both aspects of a project. This is something they fight hard for, said Hu. “We’ve had many people asking us to do an interior for them, and we’ve refused unless they’ll also allow us to do the architecture. At Le Meridien in Zhengzhou, for example, they asked us to design the interiors for the hotel. It was a very ugly building. We said