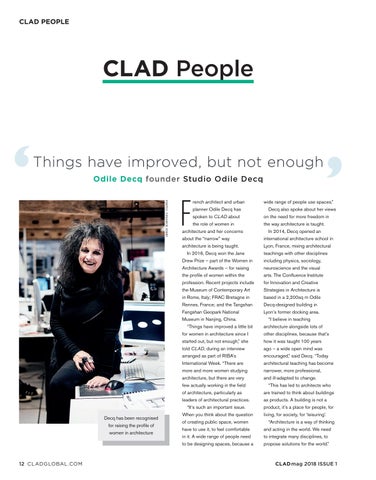 on the need for more freedom in

the role of women in

the way architecture is taught.

architecture and her concerns

architecture is being taught.

neuroscience and the visual

the profile of women within the

for Innovation and Creative

the Museum of Contemporary Art

Strategies in Architecture is

in Rome, Italy; FRAC Bretagne in

Rennes, France; and the Tangshan

Lyon’s former docking area. “I believe in teaching architecture alongside lots of

for women in architecture since I

other disciplines, because that’s

started out, but not enough,” she

how it was taught 100 years

told CLAD, during an interview

ago – a wide open mind was

arranged as part of RIBA’s

International Week. “There are

architecture, but there are very

and ill-adapted to change.

few actually working in the field

“This has led to architects who

of architecture, particularly as

are trained to think about buildings

as products. A building is not a

“It’s such an important issue.

teachings with other disciplines

Drew Prize – part of the Women in

“Things have improved a little bit

about the “narrow” way

for raising the profile of

Decq also spoke about her views

spoken to CLAD about

wide range of people use spaces.”

When you think about the question of creating public space, women

product, it’s a place for people, for living, for society, for ‘leisuring’. “Architecture is a way of thinking

have to use it, to feel comfortable

and acting in the world. We need

in it. A wide range of people need

to integrate many disciplines, to

to be designing spaces, because a

propose solutions for the world.”