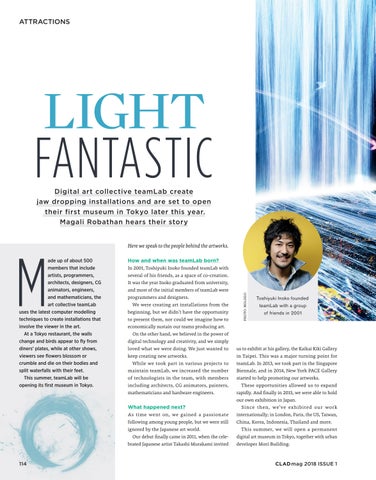 How and when was teamLab born? In 2001, Toshiyuki Inoko founded teamLab with several of his friends, as a space of co-creation. It was the year Inoko graduated from university, and most of the initial members of teamLab were programmers and designers. We were creating art installations from the beginning, but we didn’t have the opportunity to present them, nor could we imagine how to economically sustain our teams producing art. On the other hand, we believed in the power of digital technology and creativity, and we simply loved what we were doing. We just wanted to keep creating new artworks. While we took part in various projects to maintain teamLab, we increased the number of technologists in the team, with members including architects, CG animators, painters, mathematicians and hardware engineers. What happened next? As time went on, we gained a passionate following among young people, but we were still ignored by the Japanese art world. Our debut finally came in 2011, when the celebrated Japanese artist Takashi Murakami invited

ade up of about 500 members that include artists, programmers, architects, designers, CG animators, engineers, and mathematicians, the art collective teamLab uses the latest computer modelling techniques to create installations that involve the viewer in the art. At a Tokyo restaurant, the walls change and birds appear to fly from diners’ plates, while at other shows, viewers see flowers blossom or crumble and die on their bodies and split waterfalls with their feet. This summer, teamLab will be opening its first museum in Tokyo.

Here we speak to the people behind the artworks.

Toshiyuki Inoko founded teamLab with a group of friends in 2001

us to exhibit at his gallery, the Kaikai Kiki Gallery in Taipei. This was a major turning point for teamLab. In 2013, we took part in the Singapore Biennale, and in 2014, New York PACE Gallery started to help promoting our artworks. These opportunities allowed us to expand rapidly. And finally in 2015, we were able to hold our own exhibition in Japan. Since then, we’ve exhibited our work internationally; in London, Paris, the US, Taiwan, China, Korea, Indonesia, Thailand and more. This summer, we will open a permanent digital art museum in Tokyo, together with urban developer Mori Building.