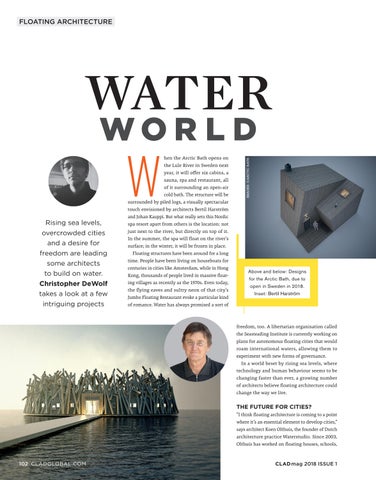 Rising sea levels, overcrowded cities and a desire for freedom are leading some architects to build on water. Christopher DeWolf takes a look at a few intriguing projects

hen the Arctic Bath opens on the Lule River in Sweden next year, it will offer six cabins, a sauna, spa and restaurant, all of it surrounding an open-air cold bath. The structure will be surrounded by piled logs, a visually spectacular touch envisioned by architects Bertil Harström and Johan Kauppi. But what really sets this Nordic spa resort apart from others is the location: not just next to the river, but directly on top of it. In the summer, the spa will float on the river’s surface; in the winter, it will be frozen in place. Floating structures have been around for a long time. People have been living on houseboats for centuries in cities like Amsterdam, while in Hong Kong, thousands of people lived in massive floating villages as recently as the 1970s. Even today, the flying eaves and sultry neon of that city’s Jumbo Floating Restaurant evoke a particular kind of romance. Water has always promised a sort of

Above and below: Designs for the Arctic Bath, due to open in Sweden in 2018. Inset: Bertil Harström

freedom, too. A libertarian organisation called the Seasteading Institute is currently working on plans for autonomous floating cities that would roam international waters, allowing them to experiment with new forms of governance. In a world beset by rising sea levels, where technology and human behaviour seems to be changing faster than ever, a growing number of architects believe floating architecture could change the way we live.

THE FUTURE FOR CITIES? “I think floating architecture is coming to a point where it’s an essential element to develop cities,” says architect Koen Olthuis, the founder of Dutch architecture practice Waterstudio. Since 2003, Olthuis has worked on floating houses, schools,