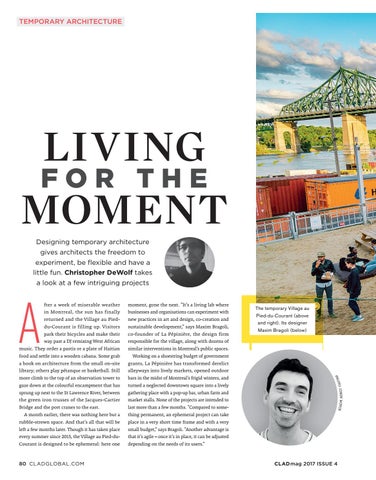 LIVING FOR THE MOMENT Designing temporary architecture gives architects the freedom to experiment, be flexible and have a little fun. Christopher DeWolf takes a look at a few intriguing projects

The temporary Village au Pied-du-Courant (above and right). Its designer Maxim Bragoli (below)

moment, gone the next. “It’s a living lab where businesses and organisations can experiment with new practices in art and design, co-creation and sustainable development,” says Maxim Bragoli, co-founder of La Pépinière, the design firm responsible for the village, along with dozens of similar interventions in Montreal’s public spaces. Working on a shoestring budget of government grants, La Pépinière has transformed derelict alleyways into lively markets, opened outdoor bars in the midst of Montreal’s frigid winters, and turned a neglected downtown square into a lively gathering place with a pop-up bar, urban farm and market stalls. None of the projects are intended to last more than a few months. “Compared to something permanent, an ephemeral project can take place in a very short time frame and with a very small budget,” says Bragoli. “Another advantage is that it’s agile – once it’s in place, it can be adjusted depending on the needs of its users.”

fter a week of miserable weather in Montreal, the sun has finally returned and the Village au Pieddu-Courant is filling up. Visitors park their bicycles and make their way past a DJ remixing West African music. They order a pastis or a plate of Haitian food and settle into a wooden cabana. Some grab a book on architecture from the small on-site library; others play pétanque or basketball. Still more climb to the top of an observation tower to gaze down at the colourful encampment that has sprung up next to the St Lawrence River, between the green iron trusses of the Jacques-Cartier Bridge and the port cranes to the east. A month earlier, there was nothing here but a rubble-strewn space. And that’s all that will be left a few months later. Though it has taken place every summer since 2015, the Village au Pied-duCourant is designed to be ephemeral: here one