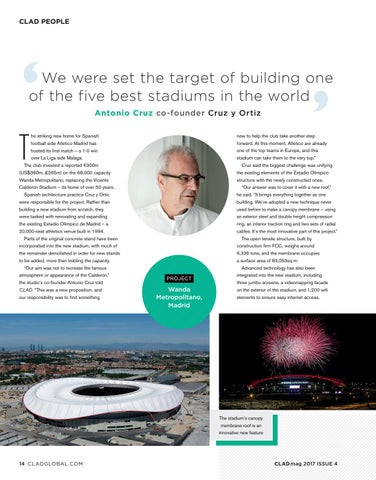 he striking new home for Spanish

new to help the club take another step

football side Atletico Madrid has

forward. At this moment, Atletico are already

one of the top teams in Europe, and this

over La Liga side Malaga.

stadium can take them to the very top.” Cruz said the biggest challenge was unifying

The club invested a reported €300m

the existing elements of the Estadio Olímpico

structure with the newly constructed ones.

Calderón Stadium – its home of over 50 years.

“Our answer was to cover it with a new roof,”

he said. “It brings everything together as one

were responsible for the project. Rather than

building a new stadium from scratch, they

used before to make a canopy membrane – using

were tasked with renovating and expanding

ring, an interior traction ring and two sets of radial

cables. It’s the most innovative part of this project.”

Parts of the original concrete stand have been

The open tensile structure, built by

incorporated into the new stadium, with much of

the remainder demolished in order for new stands

6,336 tons, and the membrane occupies

to be added, more than trebling the capacity.

“Our aim was not to recreate the famous

Advanced technology has also been

atmosphere or appearance of the Calderón,”

integrated into the new stadium, including

the studio’s co-founder Antonio Cruz told CLAD. “This was a new proposition, and our responsibility was to find something

three jumbo screens, a videomapping facade on the exterior of the stadium, and 1,200 wifi elements to ensure easy internet access.

The stadium’s canopy membrane roof is an innovative new feature