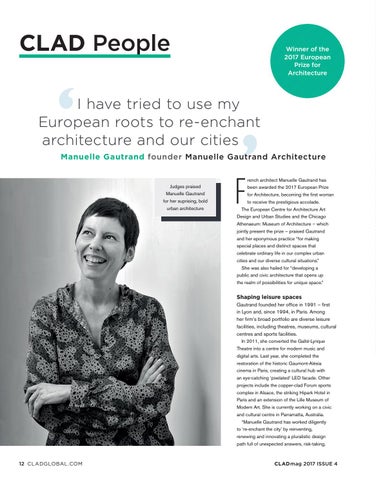 Winner of the 2017 European Prize for Architecture

rench architect Manuelle Gautrand has been awarded the 2017 European Prize for Architecture, becoming the first woman to receive the prestigious accolade.

The European Centre for Architecture Art

Design and Urban Studies and the Chicago Athenaeum: Museum of Architecture – which jointly present the prize – praised Gautrand and her eponymous practice “for making special places and distinct spaces that celebrate ordinary life in our complex urban cities and our diverse cultural situations.” She was also hailed for “developing a public and civic architecture that opens up the realm of possibilities for unique space.”

Shaping leisure spaces Gautrand founded her office in 1991 – first in Lyon and, since 1994, in Paris. Among her firm’s broad portfolio are diverse leisure facilities, including theatres, museums, cultural centres and sports facilities. In 2011, she converted the Gaîté-Lyrique Theatre into a centre for modern music and digital arts. Last year, she completed the restoration of the historic Gaumont-Alésia cinema in Paris, creating a cultural hub with an eye-catching ‘pixelated’ LED facade. Other projects include the copper-clad Forum sports complex in Alsace, the striking Hipark Hotel in Paris and an extension of the Lille Museum of Modern Art. She is currently working on a civic and cultural centre in Parramatta, Australia. “Manuelle Gautrand has worked diligently to ‘re-enchant the city’ by reinventing, renewing and innovating a pluralistic design path full of unexpected answers, risk-taking,