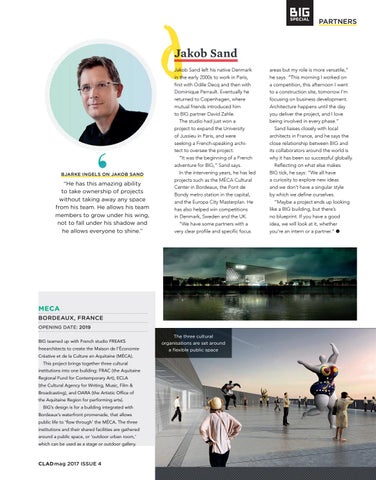 “He has this amazing ability to take ownership of projects without taking away any space from his team. He allows his team members to grow under his wing, not to fall under his shadow and he allows everyone to shine.”

Jakob Sand left his native Denmark in the early 2000s to work in Paris, ﬁrst with Odile Decq and then with Dominique Perrault. Eventually he returned to Copenhagen, where mutual friends introduced him to BIG partner David Zahle. The studio had just won a project to expand the University of Jussieu in Paris, and were seeking a French-speaking architect to oversee the project. “It was the beginning of a French adventure for BIG,” Sand says. In the intervening years, he has led projects such as the MÉCA Cultural Center in Bordeaux, the Pont de Bondy metro station in the capital, and the Europa City Masterplan. He has also helped win competitions in Denmark, Sweden and the UK. “We have some partners with a very clear proﬁle and speciﬁc focus

areas but my role is more versatile,” he says. “This morning I worked on a competition, this afternoon I went to a construction site, tomorrow I’m focusing on business development. Architecture happens until the day you deliver the project, and I love being involved in every phase.” Sand liaises closely with local architects in France, and he says the close relationship between BIG and its collaborators around the world is why it has been so successful globally. Reﬂecting on what else makes BIG tick, he says: “We all have a curiosity to explore new ideas and we don’t have a singular style by which we deﬁne ourselves. “Maybe a project ends up looking like a BIG building, but there’s no blueprint. If you have a good idea, we will look at it, whether you’re an intern or a partner.” ●

The three cultural organisations are set around a flexible public space

This project brings together three cultural institutions into one building: FRAC (the Aquitaine Regional Fund for Contemporary Art), ECLA (the Cultural Agency for Writing, Music, Film &amp; Broadcasting), and OARA (the Artistic Ofﬁce of the Aquitaine Region for performing arts). BIG’s design is for a building integrated with Bordeaux’s waterfront promenade, that allows public life to ‘ﬂow through’ the MÉCA. The three institutions and their shared facilities are gathered around a public space, or ‘outdoor urban room,’ which can be used as a stage or outdoor gallery.