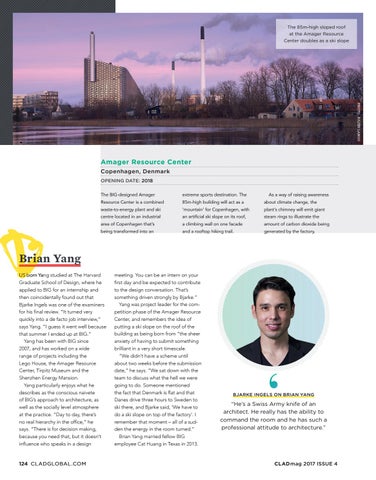 Resource Center is a combined

85m-high building will act as a

about climate change, the

As a way of raising awareness

‘mountain’ for Copenhagen, with

centre located in an industrial

an artiﬁcial ski slope on its roof,

steam rings to illustrate the

a climbing wall on one facade

amount of carbon dioxide being

being transformed into an

and a rooftop hiking trail.

generated by the factory.

Brian Yang US born Yang studied at The Harvard Graduate School of Design, where he applied to BIG for an internship and then coincidentally found out that Bjarke Ingels was one of the examiners for his ﬁnal review. “It turned very quickly into a de facto job interview,” says Yang. “I guess it went well because that summer I ended up at BIG.” Yang has been with BIG since 2007, and has worked on a wide range of projects including the Lego House, the Amager Resource Center, Tirpitz Museum and the Shenzhen Energy Mansion. Yang particularly enjoys what he describes as the conscious naivete of BIG’s approach to architecture, as well as the socially level atmosphere at the practice. “Day to day, there’s no real hierarchy in the ofﬁce,” he says. “There is for decision making, because you need that, but it doesn’t inﬂuence who speaks in a design

meeting. You can be an intern on your ﬁrst day and be expected to contribute to the design conversation. That’s something driven strongly by Bjarke.” Yang was project leader for the competition phase of the Amager Resource Center, and remembers the idea of putting a ski slope on the roof of the building as being born from “the sheer anxiety of having to submit something brilliant in a very short timescale. “We didn’t have a scheme until about two weeks before the submission date,” he says. “We sat down with the team to discuss what the hell we were going to do. Someone mentioned the fact that Denmark is ﬂat and that Danes drive three hours to Sweden to ski there, and Bjarke said, ‘We have to do a ski slope on top of the factory’. I remember that moment – all of a sudden the energy in the room turned.” Brian Yang married fellow BIG employee Cat Huang in Texas in 2013.

“He’s a Swiss Army knife of an architect. He really has the ability to command the room and he has such a professional attitude to architecture.”