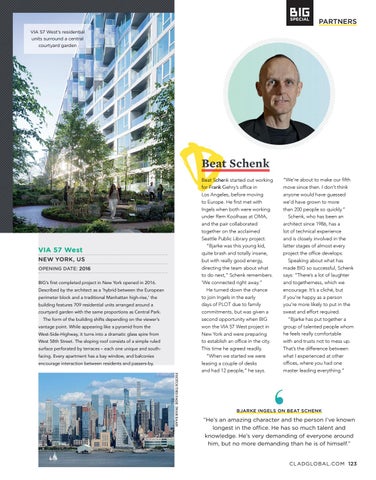 VIA 57 West NEW YORK, US OPENING DATE: 2016 BIG’s ﬁrst completed project in New York opened in 2016. Described by the architect as a ‘hybrid between the European perimeter block and a traditional Manhattan high-rise,’ the building features 709 residential units arranged around a courtyard garden with the same proportions as Central Park. The form of the building shifts depending on the viewer’s vantage point. While appearing like a pyramid from the West-Side-Highway, it turns into a dramatic glass spire from West 58th Street. The sloping roof consists of a simple ruled surface perforated by terraces – each one unique and southfacing. Every apartment has a bay window, and balconies encourage interaction between residents and passers-by. PHOTOS THIS PAGE: IWAN BAAN

Beat Schenk started out working for Frank Gehry’s ofﬁce in Los Angeles, before moving to Europe. He ﬁrst met with Ingels when both were working under Rem Koolhaas at OMA, and the pair collaborated together on the acclaimed Seattle Public Library project. “Bjarke was this young kid, quite brash and totally insane, but with really good energy, directing the team about what to do next,” Schenk remembers. ‘We connected right away.” He turned down the chance to join Ingels in the early days of PLOT due to family commitments, but was given a second opportunity when BIG won the VIA 57 West project in New York and were preparing to establish an ofﬁce in the city. This time he agreed readily. “When we started we were leasing a couple of desks and had 12 people,” he says.

“We’re about to make our ﬁfth move since then. I don’t think anyone would have guessed we’d have grown to more than 200 people so quickly.” Schenk, who has been an architect since 1986, has a lot of technical experience and is closely involved in the latter stages of almost every project the ofﬁce develops. Speaking about what has made BIG so successful, Schenk says: “There’s a lot of laughter and togetherness, which we encourage. It’s a cliché, but if you’re happy as a person you’re more likely to put in the sweat and effort required. “Bjarke has put together a group of talented people whom he feels really comfortable with and trusts not to mess up. That’s the difference between what I experienced at other ofﬁces, where you had one master leading everything.”

“He’s an amazing character and the person I’ve known longest in the office. He has so much talent and knowledge. He’s very demanding of everyone around him, but no more demanding than he is of himself.” CLADGLOBAL.COM 123