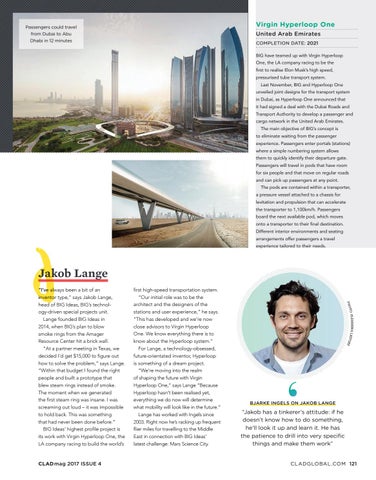 Passengers could travel from Dubai to Abu Dhabi in 12 minutes

United Arab Emirates COMPLETION DATE: 2021 BIG have teamed up with Virgin Hyperloop One, the LA company racing to be the ﬁrst to realise Elon Musk’s high speed, pressurised tube transport system. Last November, BIG and Hyperloop One unveiled joint designs for the transport system in Dubai, as Hyperloop One announced that it had signed a deal with the Dubai Roads and Transport Authority to develop a passenger and cargo network in the United Arab Emirates. The main objective of BIG’s concept is to eliminate waiting from the passenger experience. Passengers enter portals (stations) where a simple numbering system allows them to quickly identify their departure gate. Passengers will travel in pods that have room for six people and that move on regular roads and can pick up passengers at any point. The pods are contained within a transporter, a pressure vessel attached to a chassis for levitation and propulsion that can accelerate the transporter to 1,100km/h. Passengers board the next available pod, which moves onto a transporter to their ﬁnal destination. Different interior environments and seating

arrangements offer passengers a travel experience tailored to their needs.

ﬁrst high-speed transportation system. “Our initial role was to be the architect and the designers of the stations and user experience,” he says. “This has developed and we’re now close advisors to Virgin Hyperloop One. We know everything there is to know about the Hyperloop system.” For Lange, a technology-obsessed, future-orientated inventor, Hyperloop is something of a dream project. “We’re moving into the realm of shaping the future with Virgin Hyperloop One,” says Lange “Because Hyperloop hasn’t been realised yet, everything we do now will determine what mobility will look like in the future.” Lange has worked with Ingels since 2003. Right now he’s racking up frequent ﬂier miles for travelling to the Middle East in connection with BIG Ideas’ latest challenge: Mars Science City.

“I’ve always been a bit of an “I’ve inventor type,” says Jakob Lange, head of BIG Ideas, BIG’s technology-driven special projects unit. Lange founded BIG Ideas in 2014, when BIG’s plan to blow smoke rings from the Amager Resource Center hit a brick wall. “At a partner meeting in Texas, we decided I’d get $15,000 to ﬁgure out how to solve the problem,” says Lange. “Within that budget I found the right people and built a prototype that blew steam rings instead of smoke. The moment when we generated the ﬁrst steam ring was insane. I was screaming out loud – it was impossible to hold back. This was something that had never been done before.” BIG Ideas’ highest proﬁle project is its work with Virgin Hyperloop One, the LA company racing to build the world’s

“Jakob has a tinkerer’s attitude: if he doesn’t know how to do something, he’ll look it up and learn it. He has the patience to drill into very specific things and make them work” CLADGLOBAL.COM 121