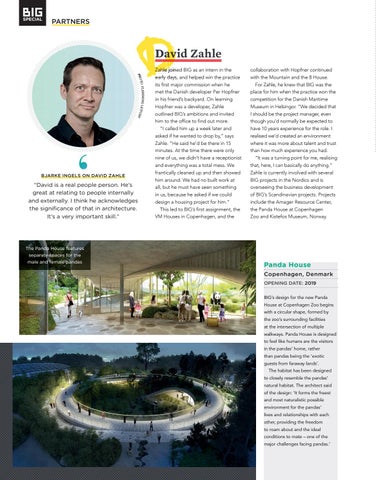 “David is a real people person. He’s great at relating to people internally and externally. I think he acknowledges the significance of that in architecture. It’s a very important skill.”

Zahle joined BIG as an intern in the early days, and helped win the practice its ﬁrst major commission when he met the Danish developer Per Hopfner in his friend’s backyard. On learning Hopfner was a developer, Zahle outlined BIG’s ambitions and invited him to the ofﬁce to ﬁnd out more. “I called him up a week later and asked if he wanted to drop by,” says Zahle. “He said he’d be there in 15 minutes. At the time there were only nine of us, we didn’t have a receptionist and everything was a total mess. We frantically cleaned up and then showed him around. We had no built work at all, but he must have seen something in us, because he asked if we could design a housing project for him.” This led to BIG’s ﬁrst assignment, the VM Houses in Copenhagen, and the

collaboration with Hopfner continued with the Mountain and the 8 House. For Zahle, he knew that BIG was the place for him when the practice won the competition for the Danish Maritime Museum in Helsingor. “We decided that I should be the project manager, even though you’d normally be expected to have 10 years experience for the role. I realised we’d created an environment where it was more about talent and trust than how much experience you had. “It was a turning point for me, realising that, here, I can basically do anything.” Zahle is currently involved with several BIG projects in the Nordics and is overseeing the business development of BIG’s Scandinavian projects. Projects include the Amager Resource Center, the Panda House at Copenhagen Zoo and Kistefos Museum, Norway.

Panda House Copenhagen, Denmark OPENING DATE: 2019 BIG’s design for the new Panda House at Copenhagen Zoo begins with a circular shape, formed by the zoo’s surrounding facilities at the intersection of multiple walkways. Panda House is designed to feel like humans are the visitors in the pandas’ home, rather than pandas being the ‘exotic guests from faraway lands’. The habitat has been designed to closely resemble the pandas’ natural habitat. The architect said of the design: ‘It forms the freest and most naturalistic possible environment for the pandas’ lives and relationships with each other, providing the freedom to roam about and the ideal conditions to mate – one of the major challenges facing pandas.’