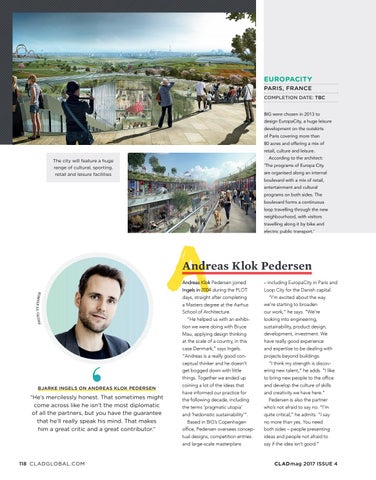 EUROPACITY PARIS, FRANCE COMPLETION DATE: TBC BIG were chosen in 2013 to design EuropaCity, a huge leisure development on the outskirts of Paris covering more than 80 acres and offering a mix of retail, culture and leisure. According to the architect:

The city will feature a huge range of cultural, sporting, retail and leisure facilities

‘The programs of Europa City are organised along an internal boulevard with a mix of retail, entertainment and cultural programs on both sides. The boulevard forms a continuous loop travelling through the new neighbourhood, with visitors travelling along it by bike and

“He’s mercilessly honest. That sometimes might come across like he isn’t the most diplomatic of all the partners, but you have the guarantee that he’ll really speak his mind. That makes him a great critic and a great contributor.”

Andreas Klok Pedersen joined Ingels in 2004 during the PLOT days, straight after completing a Masters degree at the Aarhus School of Architecture. “He helped us with an exhibition we were doing with Bruce Mau, applying design thinking at the scale of a country, in this case Denmark,” says Ingels. “Andreas is a really good conceptual thinker and he doesn’t get bogged down with little things. Together we ended up coining a lot of the ideas that have informed our practice for the following decade, including the terms ‘pragmatic utopia’ and ‘hedonistic sustainability’”. Based in BIG’s Copenhagen ofﬁce, Pedersen oversees conceptual designs, competition entries and large-scale masterplans

– including EuropaCity in Paris and Loop City for the Danish capital. “I’m excited about the way we’re starting to broaden our work,” he says. “We’re looking into engineering, sustainability, product design, development, investment. We have really good experience and expertise to be dealing with projects beyond buildings. “I think my strength is discovering new talent,” he adds. “I like to bring new people to the ofﬁce and develop the culture of skills and creativity we have here.” Pedersen is also the partner who’s not afraid to say no. “I’m quite critical,” he admits. “I say no more than yes. You need both sides – people presenting ideas and people not afraid to say if the idea isn’t good.”