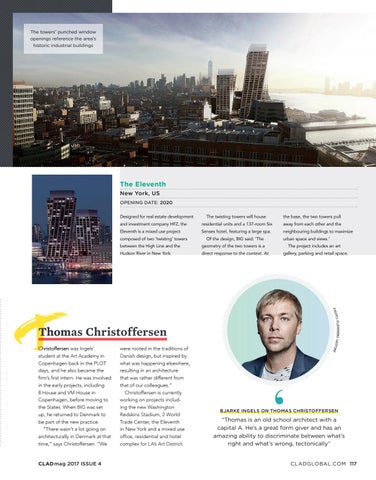 The twisting towers will house

the base, the two towers pull

and investment company HFZ, the

residential units and a 137-room Six

away from each other and the

Eleventh is a mixed use project

composed of two ‘twisting’ towers between the High Line and the

geometry of the two towers is a

direct response to the context. At

The project includes an art gallery, parking and retail space.

were rooted in the traditions of Danish design, but inspired by what was happening elsewhere, resulting in an architecture that was rather different from that of our colleagues.” Christoffersen is currently working on projects including the new Washington Redskins Stadium, 2 World Trade Center, the Eleventh in New York and a mixed use ofﬁce, residential and hotel complex for LA’s Art District.

Thomas Christoffersen Christoffersen was Ingels’ student at the Art Academy in Copenhagen back in the PLOT days, and he also became the ﬁrm’s ﬁrst intern. He was involved in the early projects, including 8 House and VM House in Copenhagen, before moving to the States. When BIG was set up, he returned to Denmark to be part of the new practice. “There wasn’t a lot going on architecturally in Denmark at that time,” says Christoffersen. “We

Of the design, BIG said: ‘The

“Thomas is an old school architect with a capital A. He’s a great form giver and has an amazing ability to discriminate between what’s right and what’s wrong, tectonically” CLADGLOBAL.COM 117