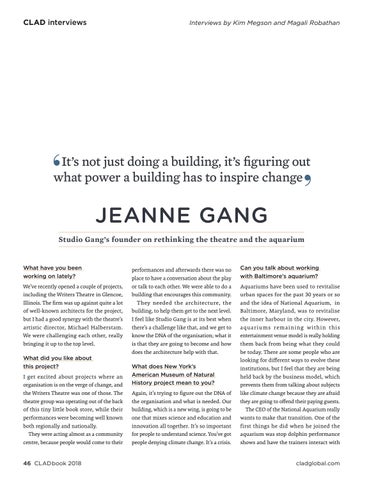 It’s not just doing a building, it’s figuring out what power a building has to inspire change

What have you been working on lately? We’ve recently opened a couple of projects, including the Writers Theatre in Glencoe, Illinois. The firm was up against quite a lot of well-known architects for the project, but I had a good synergy with the theatre’s artistic director, Michael Halberstam. We were challenging each other, really bringing it up to the top level. What did you like about this project? I get excited about projects where an organisation is on the verge of change, and the Writers Theatre was one of those. The theatre group was operating out of the back of this tiny little book store, while their performances were becoming well known both regionally and nationally. They were acting almost as a community centre, because people would come to their 46 CLAD book 2018

performances and afterwards there was no place to have a conversation about the play or talk to each other. We were able to do a building that encourages this community. They needed the architecture, the building, to help them get to the next level. I feel like Studio Gang is at its best when there’s a challenge like that, and we get to know the DNA of the organisation; what it is that they are going to become and how does the architecture help with that. What does New York’s American Museum of Natural History project mean to you? Again, it’s trying to figure out the DNA of the organisation and what is needed. Our building, which is a new wing, is going to be one that mixes science and education and innovation all together. It’s so important for people to understand science. You’ve got people denying climate change. It’s a crisis.

Can you talk about working with Baltimore’s aquarium? Aquariums have been used to revitalise urban spaces for the past 30 years or so and the idea of National Aquarium, in Baltimore, Maryland, was to revitalise the inner harbour in the city. However, aquariums remaining within this entertainment venue model is really holding them back from being what they could be today. There are some people who are looking for different ways to evolve these institutions, but I feel that they are being held back by the business model, which prevents them from talking about subjects like climate change because they are afraid they are going to offend their paying guests. The CEO of the National Aquarium really wants to make that transition. One of the first things he did when he joined the aquarium was stop dolphin performance shows and have the trainers interact with cladglobal.com