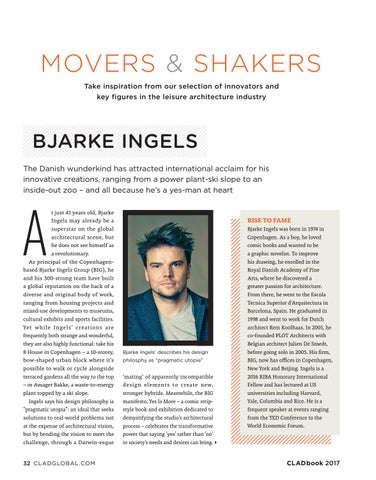 Bjarke Ingels The Danish wunderkind has attracted international acclaim for his innovative creations, ranging from a power plant-ski slope to an inside-out zoo – and all because he’s a yes-man at heart

t just 41 years old, Bjarke Ingels may already be a superstar on the global architectural scene, but he does not see himself as a revolutionary. As principal of the Copenhagenbased Bjarke Ingels Group (BIG), he and his 300-strong team have built a global reputation on the back of a diverse and original body of work, ranging from housing projects and mixed-use developments to museums, cultural exhibits and sports facilities. Yet while Ingels’ creations are frequently both strange and wonderful, they are also highly functional: take his 8 House in Copenhagen – a 10-storey, bow-shaped urban block where it’s possible to walk or cycle alongside terraced gardens all the way to the top – or Amager Bakke, a waste-to-energy plant topped by a ski slope. Ingels says his design philosophy is “pragmatic utopia”: an ideal that seeks solutions to real-world problems not at the expense of architectural vision, but by bending the vision to meet the challenge, through a Darwin-esque 32 CLADglobal.com

‘mating’ of apparently incompatible design elements to create new, stronger hybrids. Meanwhile, the BIG manifesto, Yes Is More – a comic stripstyle book and exhibition dedicated to demystifying the studio’s architectural process – celebrates the transformative power that saying ‘yes’ rather than ‘no’ to society’s needs and desires can bring.

Bjarke Ingels was born in 1974 in Copenhagen. As a boy, he loved comic books and wanted to be a graphic novelist. To improve his drawing, he enrolled in the Royal Danish Academy of Fine Arts, where he discovered a greater passion for architecture. From there, he went to the Escola Tecnica Superior d’Arquitectura in Barcelona, Spain. He graduated in 1998 and went to work for Dutch architect Rem Koolhaas. In 2001, he co-founded PLOT Architects with Belgian architect Julien De Smedt, before going solo in 2005. His firm, BIG, now has offices in Copenhagen, New York and Beijing. Ingels is a 2016 RIBA Honorary International Fellow and has lectured at US universities including Harvard, Yale, Columbia and Rice. He is a frequent speaker at events ranging from the TED Conference to the World Economic Forum.