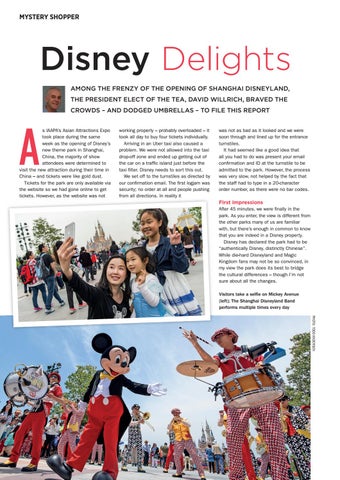 Disney Delights AMONG THE FRENZY OF THE OPENING OF SHANGHAI DISNEYLAND, THE PRESIDENT ELECT OF THE TEA, DAVID WILLRICH, BRAVED THE CROWDS – AND DODGED UMBRELLAS – TO FILE THIS REPORT

s IAAPA’s Asian Attractions Expo took place during the same week as the opening of Disney’s new theme park in Shanghai, China, the majority of show attendees were determined to visit the new attraction during their time in China – and tickets were like gold dust. Tickets for the park are only available via the website so we had gone online to get tickets. However, as the website was not

working properly – probably overloaded – it took all day to buy four tickets individually. Arriving in an Uber taxi also caused a problem. We were not allowed into the taxi drop-off zone and ended up getting out of the car on a traffic island just before the taxi filter. Disney needs to sort this out. We set off to the turnstiles as directed by our confirmation email. The first logjam was security; no order at all and people pushing from all directions. In reality it

was not as bad as it looked and we were soon through and lined up for the entrance turnstiles. It had seemed like a good idea that all you had to do was present your email confirmation and ID at the turnstile to be admitted to the park. However, the process was very slow, not helped by the fact that the staff had to type in a 20-character order number, as there were no bar codes.

First impressions After 45 minutes, we were finally in the park. As you enter, the view is different from the other parks many of us are familiar with, but there’s enough in common to know that you are indeed in a Disney property. Disney has declared the park had to be “authentically Disney, distinctly Chinese”. While die-hard Disneyland and Magic Kingdom fans may not be so convinced, in my view the park does its best to bridge the cultural differences – though I’m not sure about all the changes. Visitors take a selfie on Mickey Avenue (left); The Shanghai Disneyland Band performs multiple times every day PHOTO: TODD ANDERSON