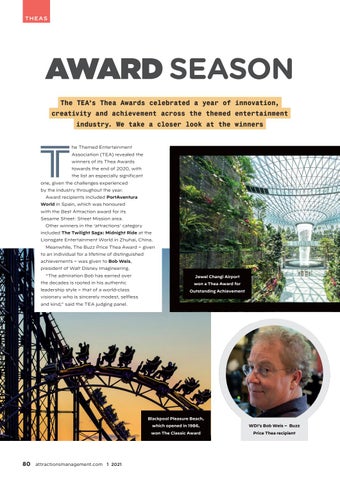 AWARD SEASON The TEA’s Thea Awards celebrated a year of innovation, creativity and achievement across the themed entertainment industry. We take a closer look at the winners

he Themed Entertainment Association (TEA) revealed the winners of its Thea Awards towards the end of 2020, with the list an especially significant

one, given the challenges experienced by the industry throughout the year. Award recipients included PortAventura World in Spain, which was honoured with the Best Attraction award for its Sesame Street: Street Mission area. Other winners in the ‘attractions’ category included The Twilight Saga: Midnight Ride at the Lionsgate Entertainment World in Zhuhai, China. Meanwhile, The Buzz Price Thea Award – given to an individual for a lifetime of distinguished achievements – was given to Bob Weis, president of Walt Disney Imagineering. “The admiration Bob has earned over the decades is rooted in his authentic leadership style – that of a world-class visionary who is sincerely modest, selfless