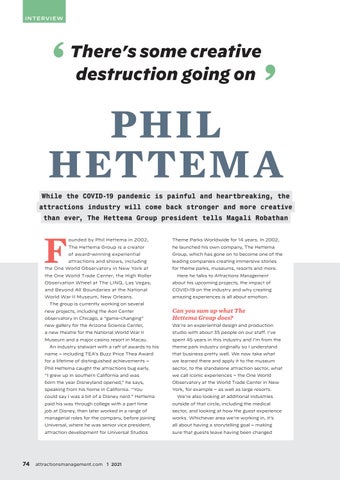 There’s some creative destruction going on

PHIL HETTEMA While the COVID-19 pandemic is painful and heartbreaking, the attractions industry will come back stronger and more creative than ever, The Hettema Group president tells Magali Robathan

The Hettema Group is a creator

he launched his own company, The Hettema

Group, which has gone on to become one of the

attractions and shows, including

the One World Observatory in New York at

Here he talks to Attractions Management

about his upcoming projects, the impact of

and Beyond All Boundaries at the National

COVID-19 on the industry and why creating

amazing experiences is all about emotion.

The group is currently working on several new projects, including the Aon Center observatory in Chicago, a “game-changing” new gallery for the Arizona Science Center,

Can you sum up what The Hettema Group does?

We’re an experiential design and production

a new theatre for the National World War II

studio with about 35 people on our staff. I’ve

Museum and a major casino resort in Macau.

spent 45 years in this industry and I’m from the

An industry stalwart with a raft of awards to his

that business pretty well. We now take what

for a lifetime of distinguished achievements –

we learned there and apply it to the museum

sector, to the standalone attraction sector, what

“I grew up in southern California and was

we call iconic experiences – the One World

Observatory at the World Trade Center in New

speaking from his home in California. “You

York, for example – as well as large resorts.

could say I was a bit of a Disney nerd.” Hettema

the One World Trade Center; the High Roller

paid his way through college with a part time

outside of that circle, including the medical

job at Disney, then later worked in a range of

sector, and looking at how the guest experience

managerial roles for the company, before joining

Universal, where he was senior vice president,

all about having a storytelling goal – making

sure that guests leave having been changed