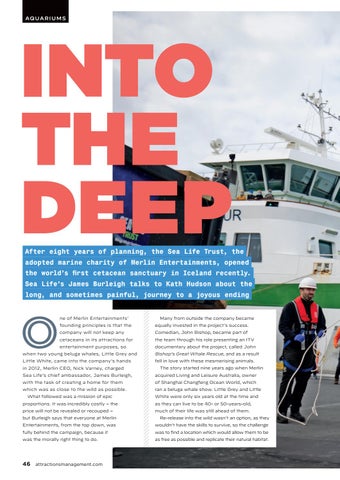 INTO THE DEEP After eight years of planning, the Sea Life Trust, the adopted marine charity of Merlin Entertainments, opened the world’s first cetacean sanctuary in Iceland recently. Sea Life’s James Burleigh talks to Kath Hudson about the long, and sometimes painful, journey to a joyous ending

Many from outside the company became

founding principles is that the

equally invested in the project’s success.

company will not keep any

cetaceans in its attractions for

the team through his role presenting an ITV

documentary about the project, called John

Bishop’s Great Whale Rescue, and as a result

fell in love with these mesmerising animals.

The story started nine years ago when Merlin

with the task of creating a home for them

of Shanghai Changfeng Ocean World, which

which was as close to the wild as possible.

What followed was a mission of epic

White were only six years old at the time and

proportions. It was incredibly costly – the

price will not be revealed or recouped –

much of their life was still ahead of them.

but Burleigh says that everyone at Merlin

Re-release into the wild wasn’t an option, as they

Entertainments, from the top down, was

wouldn’t have the skills to survive, so the challenge

fully behind the campaign, because it

was to find a location which would allow them to be

was the morally right thing to do.

as free as possible and replicate their natural habitat.