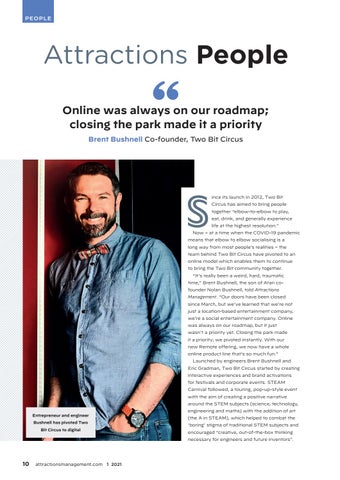 Attractions People Online was always on our roadmap; closing the park made it a priority Brent Bushnell Co-founder, Two Bit Circus

ince its launch in 2012, Two Bit Circus has aimed to bring people together “elbow-to-elbow to play, eat, drink, and generally experience life at the highest resolution.”

Now – at a time when the COVID-19 pandemic

means that elbow to elbow socialising is a long way from most people’s realities – the team behind Two Bit Circus have pivoted to an online model which enables them to continue to bring the Two Bit community together. “It’s really been a weird, hard, traumatic time,” Brent Bushnell, the son of Atari cofounder Nolan Bushnell, told Attractions Management. “Our doors have been closed since March, but we’ve learned that we’re not just a location-based entertainment company, we’re a social entertainment company. Online was always on our roadmap, but it just wasn’t a priority yet. Closing the park made it a priority; we pivoted instantly. With our new Remote offering, we now have a whole online product line that’s so much fun.” Launched by engineers Brent Bushnell and Eric Gradman, Two Bit Circus started by creating interactive experiences and brand activations for festivals and corporate events. STEAM Carnival followed, a touring, pop-up-style event with the aim of creating a positive narrative around the STEM subjects (science, technology,

engineering and maths) with the addition of art (the A in STEAM), which helped to combat the ‘boring’ stigma of traditional STEM subjects and encouraged “creative, out-of-the-box thinking necessary for engineers and future inventors”.