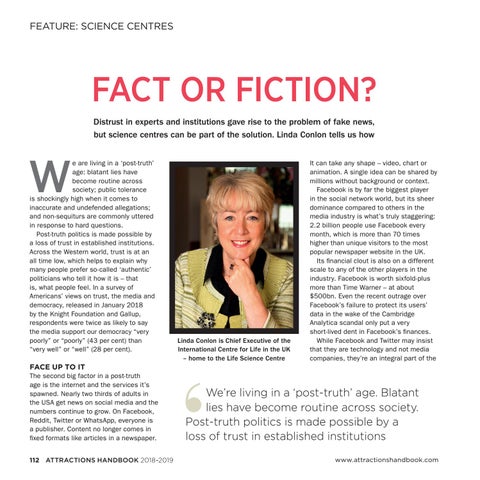 FACT OR FICTION? Distrust in experts and institutions gave rise to the problem of fake news, but science centres can be part of the solution. Linda Conlon tells us how

e are living in a ‘post-truth’ age: blatant lies have become routine across society; public tolerance is shockingly high when it comes to inaccurate and undefended allegations; and non-sequiturs are commonly uttered in response to hard questions. Post-truth politics is made possible by a loss of trust in established institutions. Across the Western world, trust is at an all time low, which helps to explain why many people prefer so-called ‘authentic’ politicians who tell it how it is – that is, what people feel. In a survey of Americans’ views on trust, the media and democracy, released in January 2018 by the Knight Foundation and Gallup, respondents were twice as likely to say the media support our democracy “very poorly” or “poorly” (43 per cent) than “very well” or “well” (28 per cent).

FACE UP TO IT The second big factor in a post-truth age is the internet and the services it’s spawned. Nearly two thirds of adults in the USA get news on social media and the numbers continue to grow. On Facebook, Reddit, Twitter or WhatsApp, everyone is a publisher. Content no longer comes in fixed formats like articles in a newspaper. 112 ATTRACTIONS HANDBOOK 2018-2019

It can take any shape – video, chart or animation. A single idea can be shared by millions without background or context. Facebook is by far the biggest player in the social network world, but its sheer dominance compared to others in the media industry is what’s truly staggering: 2.2 billion people use Facebook every month, which is more than 70 times higher than unique visitors to the most popular newspaper website in the UK. Its financial clout is also on a different scale to any of the other players in the industry. Facebook is worth sixfold-plus more than Time Warner – at about $500bn. Even the recent outrage over Facebook’s failure to protect its users’ data in the wake of the Cambridge Analytica scandal only put a very short-lived dent in Facebook’s finances. While Facebook and Twitter may insist that they are technology and not media companies, they’re an integral part of the

We’re living in a ‘post-truth’ age. Blatant lies have become routine across society. Post-truth politics is made possible by a loss of trust in established institutions www.attractionshandbook.com