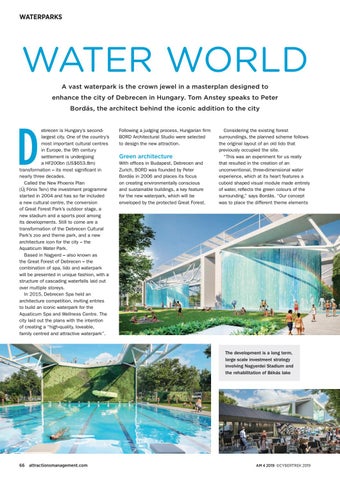 Water World A vast waterpark is the crown jewel in a masterplan designed to enhance the city of Debrecen in Hungary. Tom Anstey speaks to Peter Bordás, the architect behind the iconic addition to the city

ebrecen is Hungary’s secondlargest city. One of the country’s most important cultural centres in Europe, the 9th century settlement is undergoing a HF200bn (US$653.8m) transformation – its most significant in nearly three decades. Called the New Phoenix Plan (Új Fönix Terv) the investment programme started in 2004 and has so far included a new cultural centre, the conversion of Great Forest Park’s outdoor stage, a new stadium and a sports pool among its developments. Still to come are a transformation of the Debrecen Cultural Park’s zoo and theme park, and a new architecture icon for the city – the Aquaticum Water Park. Based in Nagyerd – also known as the Great Forest of Debrecen – the combination of spa, lido and waterpark will be presented in unique fashion, with a structure of cascading waterfalls laid out over multiple storeys. In 2015, Debrecen Spa held an architecture competition, inviting entries to build an iconic waterpark for the Aquaticum Spa and Wellness Centre. The city laid out the plans with the intention of creating a “high-quality, loveable, family centred and attractive waterpark”.

Green architecture With offices in Budapest, Debrecen and Zurich, BORD was founded by Peter Bordás in 2006 and places its focus on creating environmentally conscious and sustainable buildings, a key feature for the new waterpark, which will be enveloped by the protected Great Forest.

Considering the existing forest surroundings, the planned scheme follows the original layout of an old lido that previously occupied the site. “This was an experiment for us really that resulted in the creation of an unconventional, three-dimensional water experience, which at its heart features a cuboid shaped visual module made entirely of water, reflects the green colours of the surrounding,” says Bordás. “Our concept was to place the different theme elements

The development is a long term, large scale investment strategy involving Nagyerdei Stadium and the rehabilitation of Békás lake