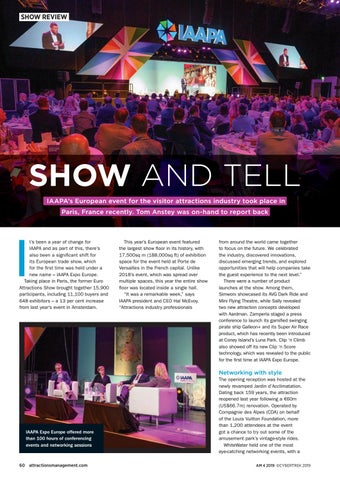 t’s been a year of change for IAAPA and as part of this, there’s also been a significant shift for its European trade show, which for the first time was held under a new name – IAAPA Expo Europe. Taking place in Paris, the former Euro Attractions Show brought together 15,900 participants, including 11,100 buyers and 648 exhibitors – a 13 per cent increase from last year’s event in Amsterdam.

This year’s European event featured the largest show floor in its history, with 17,500sq m (188,000sq ft) of exhibition space for the event held at Porte de Versailles in the French capital. Unlike 2018’s event, which was spread over multiple spaces, this year the entire show floor was located inside a single hall. “It was a remarkable week,” says IAAPA president and CEO Hal McEvoy. “Attractions industry professionals

from around the world came together to focus on the future. We celebrated the industry, discovered innovations, discussed emerging trends, and explored opportunities that will help companies take the guest experience to the next level.” There were a number of product launches at the show. Among them, Simworx showcased its AVG Dark Ride and Mini Flying Theatre, while Sally revealed two new attraction concepts developed with Aardman. Zamperla staged a press conference to launch its gamified swinging pirate ship Galleon+ and its Super Air Race product, which has recently been introduced at Coney Island’s Luna Park. Clip ‘n Climb also showed off its new Clip ‘n Score technology, which was revealed to the public for the first time at IAAPA Expo Europe.

The opening reception was hosted at the newly revamped Jardin d’Acclimatation. Dating back 159 years, the attraction reopened last year following a €60m (US$66.7m) renovation. Operated by Compagnie des Alpes (CDA) on behalf of the Louis Vuitton Foundation, more than 1,200 attendees at the event got a chance to try out some of the amusement park’s vintage-style rides. WhiteWater held one of the most eye-catching networking events, with a AM 4 2019 ©Cybertrek 2019