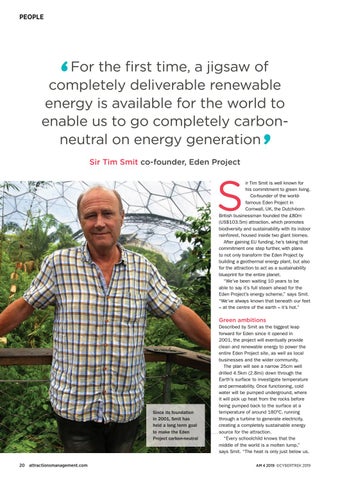 For the first time, a jigsaw of completely deliverable renewable energy is available for the world to enable us to go completely carbonneutral on energy generation Sir Tim Smit co-founder, Eden Project

ir Tim Smit is well known for his commitment to green living. Co-founder of the worldfamous Eden Project in Cornwall, UK, the Dutch-born British businessman founded the £80m (US$103.5m) attraction, which promotes biodiversity and sustainability with its indoor rainforest, housed inside two giant biomes. After gaining EU funding, he’s taking that commitment one step further, with plans to not only transform the Eden Project by building a geothermal energy plant, but also for the attraction to act as a sustainability blueprint for the entire planet. “We’ve been waiting 10 years to be able to say it’s full steam ahead for the Eden Project’s energy scheme,” says Smit. “We’ve always known that beneath our feet – at the centre of the earth – it’s hot.”

Since its foundation in 2001, Smit has held a long term goal to make the Eden Project carbon-neutral

Described by Smit as the biggest leap forward for Eden since it opened in 2001, the project will eventually provide clean and renewable energy to power the entire Eden Project site, as well as local businesses and the wider community. The plan will see a narrow 25cm well drilled 4.5km (2.8mi) down through the Earth’s surface to investigate temperature and permeability. Once functioning, cold water will be pumped underground, where it will pick up heat from the rocks before being pumped back to the surface at a temperature of around 180°C, running through a turbine to generate electricity, creating a completely sustainable energy source for the attraction. “Every schoolchild knows that the middle of the world is a molten lump,” says Smit. “The heat is only just below us. AM 4 2019 ©Cybertrek 2019