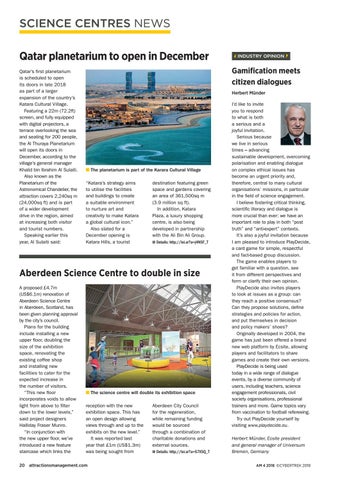 SCIENCE CENTRES NEWS Qatar planetarium to open in December Qatar’s first planetarium is scheduled to open its doors in late 2018 as part of a larger expansion of the country’s Katara Cultural Village. Featuring a 22m (72.2ft) screen, and fully equipped with digital projectors, a terrace overlooking the sea and seating for 200 people, the Al Thuraya Planetarium will open its doors in December, according to the village’s general manager Khalid bin Ibrahim Al Sulaiti. Also known as the Planetarium of the Astronomical Chandelier, the attraction covers 2,240sq m (24,000sq ft) and is part of a wider development drive in the region, aimed at increasing both visitor and tourist numbers. Speaking earlier this year, Al Sulaiti said:

■■The planetarium is part of the Karara Cultural Village “Katara’s strategy aims to utilise the facilities and buildings to create a suitable environment to nurture art and creativity to make Katara a global cultural icon.” Also slated for a December opening is Katara Hills, a tourist

Aberdeen Science Centre to double in size A proposed £4.7m (US$6.1m) renovation of Aberdeen Science Centre in Aberdeen, Scotland, has been given planning approval by the city’s council. Plans for the building include installing a new upper floor, doubling the size of the exhibition space, renovating the existing coffee shop and installing new facilities to cater for the expected increase in the number of visitors. “This new floor incorporates voids to allow light from above to filter down to the lower levels,” said project designers Halliday Fraser Munro. “In conjunction with the new upper floor, we’ve introduced a new feature staircase which links the

■■The science centre will double its exhibition space reception with the new exhibition space. This has an open design allowing views through and up to the exhibits on the new level.” It was reported last year that £1m (US$1.3m) was being sought from

Aberdeen City Council for the regeneration, while remaining funding would be sourced through a combination of charitable donations and external sources. ■■Details: http://lei.sr?a=S7X5Q_T

I’d like to invite you to respond to what is both a serious and a joyful invitation. Serious because we live in serious times – advancing sustainable development, overcoming polarisation and enabling dialogue on complex ethical issues has become an urgent priority and, therefore, central to many cultural organisations’ missions, in particular in the field of science engagement. I believe fostering critical thinking, scientific literacy and dialogue is more crucial than ever: we have an important role to play in both “post truth” and “anti-expert” contexts. It’s also a joyful invitation because I am pleased to introduce PlayDecide, a card game for simple, respectful and fact-based group discussion. The game enables players to get familiar with a question, see it from different perspectives and form or clarify their own opinion. PlayDecide also invites players to look at issues as a group: can they reach a positive consensus? Can they propose solutions, define strategies and policies for action, and put themselves in decision and policy makers’ shoes? Originally developed in 2004, the game has just been offered a brand new web platform by Ecsite, allowing players and facilitators to share games and create their own versions. PlayDecide is being used today in a wide range of dialogue events, by a diverse community of users, including teachers, science engagement professionals, civil society organisations, professional trainers and more. Game topics vary from vaccination to football refereeing. Try out PlayDecide yourself by visiting www.playdecide.eu. Herbert Münder, Ecsite president and general manager of Universum Bremen, Germany AM 4 2018 ©CYBERTREK 2018