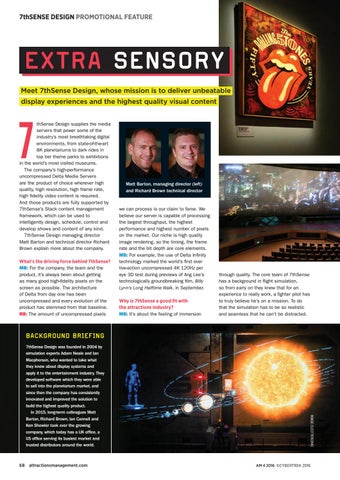 thSense Design supplies the media servers that power some of the industry’s most breathtaking digital environments, from state-of-the-art 8K planetariums to dark rides in top tier theme parks to exhibitions in the world’s most visited museums. The company’s high-performance uncompressed Delta Media Servers are the product of choice wherever high quality, high resolution, high frame rate, high fidelity video content is required. And those products are fully supported by 7thSense’s Stack content management framework, which can be used to intelligently design, schedule, control and develop shows and content of any kind. 7thSense Design managing director Matt Barton and technical director Richard Brown explain more about the company. What’s the driving force behind 7thSense? MB: For the company, the team and the product, it’s always been about getting as many good high-fidelity pixels on the screen as possible. The architecture of Delta from day one has been uncompressed and every evolution of the product has stemmed from that baseline. RB: The amount of uncompressed pixels

we can process is our claim to fame. We believe our server is capable of processing the largest throughput, the highest performance and highest number of pixels on the market. Our niche is high quality image rendering, so the timing, the frame rate and the bit depth are core elements. MB: For example, the use of Delta Infinity technology marked the world’s first ever live-action uncompressed 4K 120Hz per eye 3D test during previews of Ang Lee’s technologically groundbreaking film, Billy Lynn’s Long Halftime Walk, in September. Why is 7thSense a good fit with the attractions industry? MB: It’s about the feeling of immersion

through quality. The core team of 7thSense has a background in flight simulation, so from early on they knew that for an experience to really work, a fighter pilot has to truly believe he’s on a mission. To do that the simulation has to be so realistic and seamless that he can’t be distracted.

7thSense Design was founded in 2004 by simulation experts Adam Neale and Ian Macpherson, who wanted to take what they knew about display systems and apply it to the entertainment industry. They developed software which they were able to sell into the planetarium market, and since then the company has consistently innovated and improved the solution to build the highest quality product. In 2015, long-term colleagues Matt Barton, Richard Brown, Ian Cannell and Ken Showler took over the growing company, which today has a UK office, a US office serving its busiest market and trusted distributors around the world.