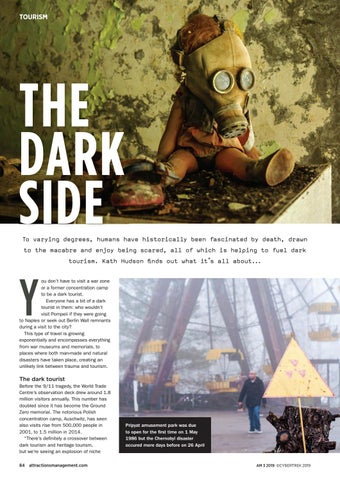 THE DARK SIDE To varying degrees, humans have historically been fascinated by death, drawn to the macabre and enjoy being scared, all of which is helping to fuel dark tourism. Kath Hudson fi nds out what it’s all about...

ou don’t have to visit a war zone or a former concentration camp to be a dark tourist. Everyone has a bit of a dark tourist in them: who wouldn’t visit Pompeii if they were going to Naples or seek out Berlin Wall remnants during a visit to the city? This type of travel is growing exponentially and encompasses everything from war museums and memorials, to places where both man-made and natural disasters have taken place, creating an unlikely link between trauma and tourism.

The dark tourist Before the 9/11 tragedy, the World Trade Centre’s observation deck drew around 1.8 million visitors annually. This number has doubled since it has become the Ground Zero memorial. The notorious Polish concentration camp, Auschwitz, has seen also visits rise from 500,000 people in 2001, to 1.5 million in 2014. “There’s definitely a crossover between dark tourism and heritage tourism, but we’re seeing an explosion of niche 84 attractionsmanagement.com