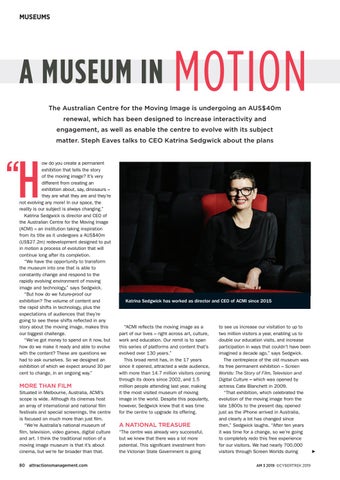 the australian Centre for the Moving image is undergoing an aus$40m renewal, which has been designed to increase interactivity and engagement, as well as enable the centre to evolve with its subject matter. steph eaves talks to Ceo Katrina sedgwick about the plans

ow do you create a permanent exhibition that tells the story of the moving image? It’s very different from creating an exhibition about, say, dinosaurs – they are what they are and they’re not evolving any more! In our space, the reality is our subject is always changing.” Katrina Sedgwick is director and CEO of the Australian Centre for the Moving Image (ACMI) – an institution taking inspiration from its title as it undergoes a AUS$40m (US$27.2m) redevelopment designed to put in motion a process of evolution that will continue long after its completion. “We have the opportunity to transform the museum into one that is able to constantly change and respond to the rapidly evolving environment of moving image and technology,” says Sedgwick. “But how do we future-proof our exhibition? The volume of content and the rapid shifts in technology, plus the expectations of audiences that they’re going to see these shifts reflected in any story about the moving image, makes this our biggest challenge. “We’ve got money to spend on it now, but how do we make it ready and able to evolve with the content? These are questions we had to ask ourselves. So we designed an exhibition of which we expect around 30 per cent to change, in an ongoing way.”

More than filM Situated in Melbourne, Australia, ACMI’s scope is wide. Although its cinemas host an array of international and national film festivals and special screenings, the centre is focused on much more than just film. “We’re Australia’s national museum of film, television, video games, digital culture and art. I think the traditional notion of a moving image museum is that it’s about cinema, but we’re far broader than that. 80 attractionsmanagement.com

“ACMI reflects the moving image as a part of our lives – right across art, culture, work and education. Our remit is to span this series of platforms and content that’s evolved over 130 years.” This broad remit has, in the 17 years since it opened, attracted a wide audience, with more than 14.7 million visitors coming through its doors since 2002, and 1.5 million people attending last year, making it the most visited museum of moving image in the world. Despite this popularity, however, Sedgwick knew that it was time for the centre to upgrade its offering.

a national treasure “The centre was already very successful, but we knew that there was a lot more potential. This significant investment from the Victorian State Government is going

to see us increase our visitation to up to two million visitors a year, enabling us to double our education visits, and increase participation in ways that couldn’t have been imagined a decade ago,” says Sedgwick. The centrepiece of the old museum was its free permanent exhibition – Screen Worlds: The Story of Film, Television and Digital Culture – which was opened by actress Cate Blanchett in 2009. “That exhibition, which celebrated the evolution of the moving image from the late 1800s to the present day, opened just as the iPhone arrived in Australia, and clearly a lot has changed since then,” Sedgwick laughs. “After ten years it was time for a change, so we’re going to completely redo this free experience for our visitors. We had nearly 700,000 visitors through Screen Worlds during AM 3 2019 ©Cybertrek 2019