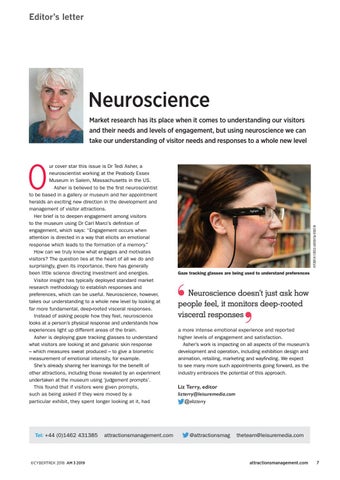 ur cover star this issue is Dr Tedi Asher, a neuroscientist working at the Peabody Essex Museum in Salem, Massachusetts in the US. Asher is believed to be the first neuroscientist to be based in a gallery or museum and her appointment heralds an exciting new direction in the development and management of visitor attractions. Her brief is to deepen engagement among visitors to the museum using Dr Carl Marci’s definition of engagement, which says: “Engagement occurs when attention is directed in a way that elicits an emotional response which leads to the formation of a memory.” How can we truly know what engages and motivates visitors? The question lies at the heart of all we do and surprisingly, given its importance, there has generally been little science directing investment and energies. Visitor insight has typically deployed standard market research methodology to establish responses and preferences, which can be useful. Neuroscience, however, takes our understanding to a whole new level by looking at far more fundamental, deep-rooted visceral responses. Instead of asking people how they feel, neuroscience looks at a person’s physical response and understands how experiences light up different areas of the brain. Asher is deploying gaze tracking glasses to understand what visitors are looking at and galvanic skin response – which measures sweat produced – to give a biometric measurement of emotional intensity, for example. She’s already sharing her learnings for the benefit of other attractions, including those revealed by an experiment undertaken at the museum using ‘judgement prompts’. This found that if visitors were given prompts, such as being asked if they were moved by a particular exhibit, they spent longer looking at it, had

Gaze tracking glasses are being used to understand preferences

Neuroscience doesn’t just ask how people feel, it monitors deep-rooted visceral responses a more intense emotional experience and reported higher levels of engagement and satisfaction. Asher’s work is impacting on all aspects of the museum’s development and operation, including exhibition design and animation, retailing, marketing and wayfinding. We expect to see many more such appointments going forward, as the industry embraces the potential of this approach.