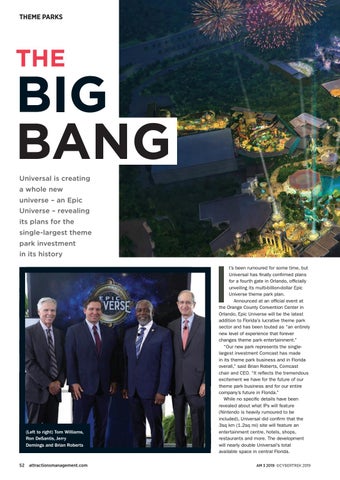 t’s been rumoured for some time, but Universal has finally confirmed plans for a fourth gate in Orlando, officially unveiling its multi-billion-dollar Epic Universe theme park plan. Announced at an official event at the Orange County Convention Center in Orlando, Epic Universe will be the latest addition to Florida’s lucrative theme park sector and has been touted as “an entirely new level of experience that forever changes theme park entertainment.” “Our new park represents the singlelargest investment Comcast has made in its theme park business and in Florida overall,” said Brian Roberts, Comcast chair and CEO. “It reflects the tremendous excitement we have for the future of our theme park business and for our entire company’s future in Florida.” While no specific details have been revealed about what IPs will feature (Nintendo is heavily rumoured to be included), Universal did confirm that the 3sq km (1.2sq mi) site will feature an entertainment centre, hotels, shops, restaurants and more. The development will nearly double Universal’s total available space in central Florida. AM 3 2019 ©Cybertrek 2019