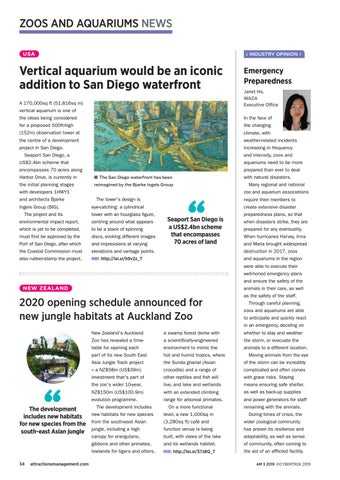 vertical aquarium is one of the ideas being considered

In the face of

for a proposed 500ft-high

the centre of a development

and intensity, zoos and

aquariums need to be more

prepared than ever to deal

Harbor Drive, is currently in

■■ The San Diego waterfront has been

reimagined by the Bjarke Ingels Group

with developers 1HWY1 and architects Bjarke Ingels Group (BIG). The project and its

with natural disasters. Many regional and national zoo and aquarium associations

The tower's design is

require their members to

tower with an hourglass figure,

Seaport San Diego is a US$2.4bn scheme that encompasses 70 acres of land

preparedness plans, so that

centring around what appears

which is yet to be completed,

to be a stack of spinning

must first be approved by the

Port of San Diego, after which

and impressions at varying

the Coastal Commission must

and aquariums in the region

when disasters strike, they are prepared for any eventuality. When hurricanes Harvey, Irma and Maria brought widespread

animals in their care, as well

as the safety of the staff. Through careful planning, zoos and aquariums are able to anticipate and quickly react in an emergency, deciding on

a swamp forest dome with

whether to stay and weather

Zoo has revealed a time-

the storm, or evacuate the

table for opening each

environment to mimic the

animals to a different location.

part of its new South East

hot and humid tropics, where

of the storm can be incredibly

crocodile) and a range of

other reptiles and fish will

live, and lake and wetlands

with an extended climbing

as well as back-up supplies

and power generators for staff

On a more functional

Moving animals from the eye

remaining with the animals. During times of crisis, the

from the south-east Asian

jungle, including a high

function venue is being

has proven its resilience and

built, with views of the lake

adaptability, as well as sense

gibbons and other primates,

and its wetlands habitat.

of community, often coming to

lowlands for tigers and otters,