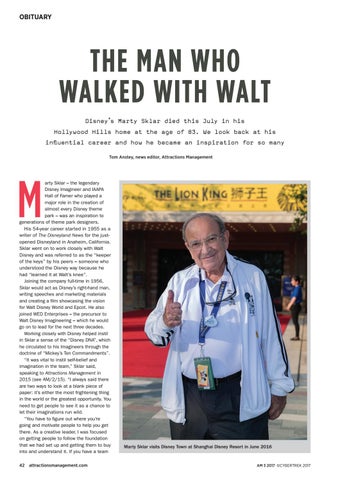 The Man Who Walked With Walt Disney’s Marty Sklar died this July in his Hollywood Hills home at the age of 83. We look back at his influential career and how he became an inspiration for so many Tom Anstey, news editor, Attractions Management

arty Sklar – the legendary Disney Imagineer and IAAPA Hall of Famer who played a major role in the creation of almost every Disney theme park – was an inspiration to generations of theme park designers. His 54-year career started in 1955 as a writer of The Disneyland News for the justopened Disneyland in Anaheim, California. Sklar went on to work closely with Walt Disney and was referred to as the “keeper of the keys” by his peers – someone who understood the Disney way because he had “learned it at Walt’s knee”. Joining the company full-time in 1956, Sklar would act as Disney’s right-hand man, writing speeches and marketing materials and creating a film showcasing the vision for Walt Disney World and Epcot. He also joined WED Enterprises – the precursor to Walt Disney Imagineering – which he would go on to lead for the next three decades. Working closely with Disney helped instil in Sklar a sense of the “Disney DNA”, which he circulated to his Imagineers through the doctrine of “Mickey’s Ten Commandments”. “It was vital to instil self-belief and imagination in the team,” Sklar said, speaking to Attractions Management in 2015 (see AM/2/15). “I always said there are two ways to look at a blank piece of paper: it’s either the most frightening thing in the world or the greatest opportunity. You need to get people to see it as a chance to let their imaginations run wild. “You have to figure out where you’re going and motivate people to help you get there. As a creative leader, I was focused on getting people to follow the foundation that we had set up and getting them to buy into and understand it. If you have a team 42 attractionsmanagement.com