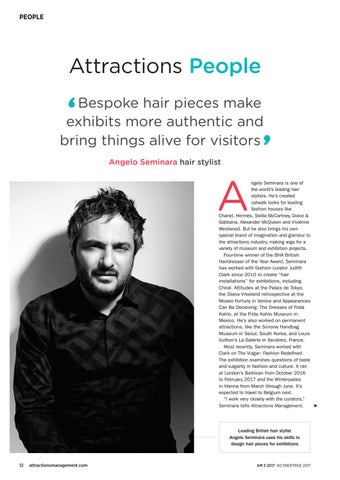 ngelo Seminara is one of the world’s leading hair stylists. He’s created catwalk looks for leading fashion houses like Chanel, Hermès, Stella McCartney, Dolce & Gabbana, Alexander McQueen and Vivienne Westwood. But he also brings his own special brand of imagination and glamour to the attractions industry, making wigs for a variety of museum and exhibition projects. Four-time winner of the BHA British Hairdresser of the Year Award, Seminara has worked with fashion curator Judith Clark since 2010 to create “hair installations” for exhibitions, including Chloé. Attitudes at the Palais de Tokyo, the Diana Vreeland retrospective at the Museo Fortuny in Venice and Appearances Can Be Deceiving: The Dresses of Frida Kahlo, at the Frida Kahlo Museum in Mexico. He’s also worked on permanent attractions, like the Simone Handbag Museum in Seoul, South Korea, and Louis Vuitton’s La Galerie in Asnières, France. Most recently, Seminara worked with Clark on The Vulgar: Fashion Redefined. The exhibition examines questions of taste and vulgarity in fashion and culture. It ran at London’s Barbican from October 2016 to February 2017 and the Winterpalais in Vienna from March through June. It’s expected to travel to Belgium next. “I work very closely with the curators,” Seminara tells Attractions Management.