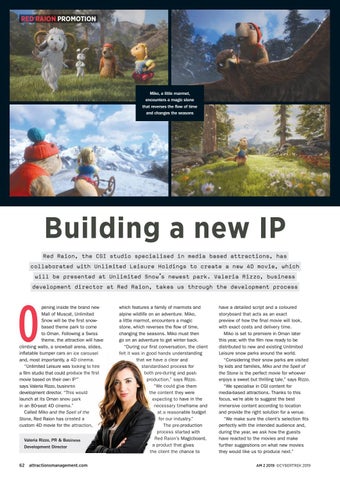 Miko, a little marmot, encounters a magic stone that reverses the flow of time and changes the seasons

Building a new IP Red Raion, the CGI studio specialised in media based attractions, has collaborated with Unlimited Leisure Holdings to create a new 4D movie, which will be presented at Unlimited Snow’s newest park. Valeria Rizzo, business development director at Red Raion, takes us through the development process

pening inside the brand new Mall of Muscat, Unlimited Snow will be the first snowbased theme park to come to Oman. Following a Swiss theme, the attraction will have climbing walls, a snowball arena, slides, inflatable bumper cars an ice carousel and, most importantly, a 4D cinema. “Unlimited Leisure was looking to hire a film studio that could produce the first movie based on their own IP” says Valeria Rizzo, business development director. “This would launch at its Oman snow park in an 80-seat 4D cinema.” Called Miko and the Spell of the Stone,, Red Raion has created a custom 4D movie for the attraction, Valeria Rizzo, PR &amp; Business Development Director

which features a family of marmots and alpine wildlife on an adventure. Miko, a little marmot, encounters a magic stone, which reverses the flow of time, changing the seasons. Miko must then go on an adventure to get winter back. “During our first conversation, the client felt it was in good hands understanding that we have a clear and standardised process for both pre-during and postproduction,” says RIzzo. “We could give them the content they were expecting to have in the necessary timeframe and at a reasonable budget for our industry.” The pre-production process started with Red Raion’s Magicboard, a product that gives the client the chance to

have a detailed script and a coloured storyboard that acts as an exact preview of how the final movie will look, with exact costs and delivery time. Miko is set to premiere in Oman later this year, with the film now ready to be distributed to new and existing Unlimited Leisure snow parks around the world. “Considering their snow parks are visited by kids and families, Miko and the Spell of the Stone is the perfect movie for whoever enjoys a sweet but thrilling tale,” says Rizzo. “We specialise in CGI content for media-based attractions. Thanks to this focus, we’re able to suggest the best immersive content according to location and provide the right solution for a venue. “We make sure the client’s selection fits perfectly with the intended audience and, during the year, we ask how the guests have reacted to the movies and make further suggestions on what new movies they would like us to produce next.” AM 2 2019 ©CYBERTREK 2019