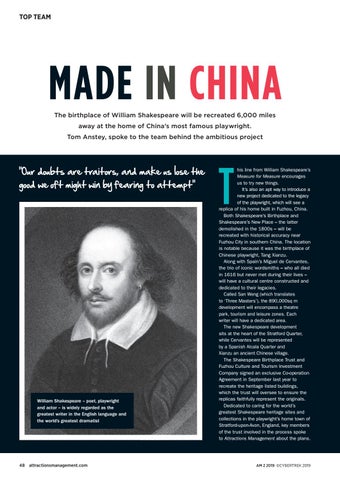 Made in China The birthplace of William Shakespeare will be recreated 6,000 miles away at the home of China’s most famous playwright. Tom Anstey, spoke to the team behind the ambitious project

"Our doubts are traitors, and make us lose the good we oft might win by fearing to attempt"

William Shakespeare – poet, playwright and actor – is widely regarded as the greatest writer in the English language and the world’s greatest dramatist

his line from William Shakespeare’s Measure for Measure encourages us to try new things. It’s also an apt way to introduce a new project dedicated to the legacy of the playwright, which will see a replica of his home built in Fuzhou, China. Both Shakespeare’s Birthplace and Shakespeare’s New Place – the latter demolished in the 1800s – will be recreated with historical accuracy near Fuzhou City in southern China. The location is notable because it was the birthplace of Chinese playwright, Tang Xianzu. Along with Spain’s Miguel de Cervantes, the trio of iconic wordsmiths – who all died in 1616 but never met during their lives – will have a cultural centre constructed and dedicated to their legacies. Called San Weng (which translates to ‘Three Masters’), the 890,000sq m development will encompass a theatre park, tourism and leisure zones. Each writer will have a dedicated area. The new Shakespeare development sits at the heart of the Stratford Quarter, while Cervantes will be represented by a Spanish Alcala Quarter and Xianzu an ancient Chinese village. The Shakespeare Birthplace Trust and Fuzhou Culture and Tourism Investment Company signed an exclusive Co-operation Agreement in September last year to recreate the heritage listed buildings, which the trust will oversee to ensure the replicas faithfully represent the originals. Dedicated to caring for the world’s greatest Shakespeare heritage sites and collections in the playwright’s home town of Stratford-upon-Avon, England, key members of the trust involved in the process spoke to Attractions Management about the plans.