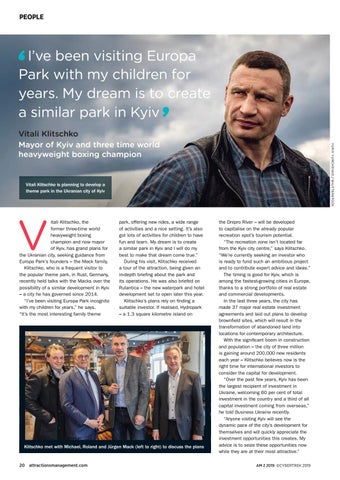 I’ve been visiting Europa Park with my children for years. My dream is to create a similar park in Kyiv YuriY Yurchenko / ShutterStock

itali Klitschko, the former three-time world heavyweight boxing champion and now mayor of Kyiv, has grand plans for the Ukranian city, seeking guidance from Europa Park’s founders – the Mack family. Klitschko, who is a frequent visitor to the popular theme park, in Rust, Germany, recently held talks with the Macks over the possibility of a similar development in Kyiv – a city he has governed since 2014. “I’ve been visiting Europa Park incognito with my children for years,” he says. “It’s the most interesting family theme

park, offering new rides, a wide range of activities and a nice setting. It’s also got lots of activities for children to have fun and learn. My dream is to create a similar park in Kyiv and I will do my best to make that dream come true.” During his visit, Klitschko received a tour of the attraction, being given an in-depth briefing about the park and its operations. He was also briefed on Rulantica – the new waterpark and hotel development set to open later this year. Klitschko’s plans rely on finding a suitable investor. If realised, Hydropark – a 1.3 square kilometre island on

Klitschko met with Michael, Roland and Jürgen Mack (left to right) to discuss the plans

the Dnipro River – will be developed to capitalise on the already popular recreation spot’s tourism potential. “The recreation zone isn’t located far from the Kyiv city centre,” says Klitschko. “We’re currently seeking an investor who is ready to fund such an ambitious project and to contribute expert advice and ideas.” The timing is good for Kyiv, which is among the fastest-growing cities in Europe, thanks to a strong portfolio of real estate and commercial developments. In the last three years, the city has made 37 major real estate investment agreements and laid out plans to develop brownfield sites, which will result in the transformation of abandoned land into locations for contemporary architecture. With the significant boom in construction and population – the city of three million is gaining around 200,000 new residents each year – Klitschko believes now is the right time for international investors to consider the capital for development. “Over the past few years, Kyiv has been the largest recipient of investment in Ukraine, welcoming 60 per cent of total investment in the country and a third of all capital investment coming from overseas,” he told Business Ukraine recently. “Anyone visiting Kyiv will see the dynamic pace of the city’s development for themselves and will quickly appreciate the investment opportunities this creates. My advice is to seize these opportunities now while they are at their most attractive.” AM 2 2019 ©Cybertrek 2019