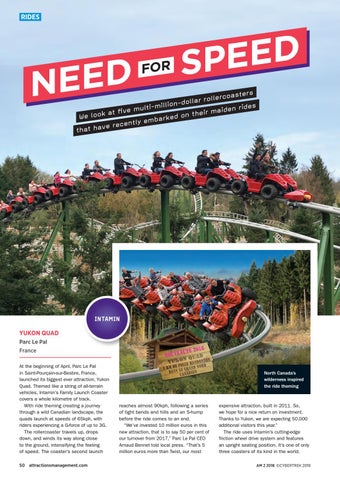 INTAMIN YUKON QUAD Parc Le Pal France At the beginning of April, Parc Le Pal in Saint-Pourçain-sur-Besbre, France, launched its biggest ever attraction, Yukon Quad. Themed like a string of all-terrain vehicles, Intamin’s Family Launch Coaster covers a whole kilometre of track. With ride theming creating a journey through a wild Canadian landscape, the quads launch at speeds of 65kph, with riders experiencing a G-force of up to 3G. The rollercoaster travels up, drops down, and winds its way along close to the ground, intensifying the feeling of speed. The coaster’s second launch 50 attractionsmanagement.com

reaches almost 90kph, following a series of tight bends and hills and an S-hump before the ride comes to an end. “We’ve invested 10 million euros in this new attraction, that is to say 50 per cent of our turnover from 2017,” Parc Le Pal CEO Arnaud Bennet told local press. “That’s 5 million euros more than Twist, our most

expensive attraction, built in 2011. So, we hope for a nice return on investment. Thanks to Yukon, we are expecting 50,000 additional visitors this year.” The ride uses Intamin’s cutting-edge friction wheel drive system and features an upright seating position. It’s one of only three coasters of its kind in the world. AM 2 2018 ©CYBERTREK 2018