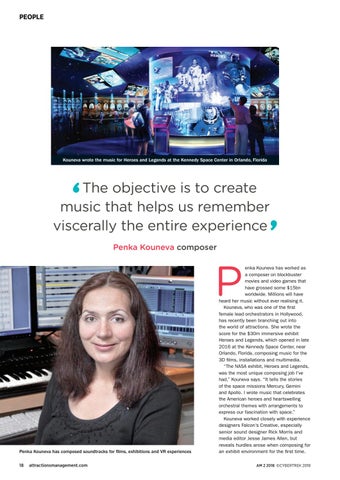 Kouneva wrote the music for Heroes and Legends at the Kennedy Space Center in Orlando, Florida

enka Kouneva has worked as a composer on blockbuster movies and video games that have grossed some $15bn worldwide. Millions will have heard her music without ever realising it. Kouneva, who was one of the first female lead orchestrators in Hollywood, has recently been branching out into the world of attractions. She wrote the score for the $30m immersive exhibit Heroes and Legends, which opened in late 2016 at the Kennedy Space Center, near Orlando, Florida, composing music for the 3D films, installations and multimedia. “The NASA exhibit, Heroes and Legends, was the most unique composing job I’ve had,” Kouneva says. “It tells the stories of the space missions Mercury, Gemini and Apollo. I wrote music that celebrates the American heroes and heartswelling orchestral themes with arrangements to express our fascination with space.” Kouneva worked closely with experience designers Falcon’s Creative, especially senior sound designer Rick Morris and media editor Jesse James Allen, but reveals hurdles arose when composing for an exhibit environment for the first time. AM 2 2018 ©Cybertrek 2018