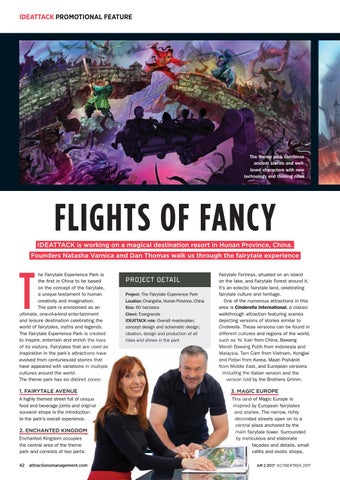 FLIGHTS OF FANCY IDEATTACK is working on a magical destination resort in Hunan Province, China. Founders Natasha Varnica and Dan Thomas walk us through the fairytale experience

he Fairytale Experience Park is the first in China to be based on the concept of the fairytale, a unique testament to human creativity and imagination. The park is envisioned as an ultimate, one-of-a-kind entertainment and leisure destination celebrating the world of fairytales, myths and legends. The Fairytale Experience Park is created to inspire, entertain and enrich the lives of its visitors. Fairytales that are used as inspiration in the park’s attractions have evolved from centuries-old stories that have appeared with variations in multiple cultures around the world. The theme park has six distinct zones:

Fairytale Fortress, situated on an island on the lake, and Fairytale Forest around it. It’s an eclectic fairytale land, celebrating fairytale culture and heritage. One of the numerous attractions in this area is Cinderella International, a classic walkthrough attraction featuring scenes depicting versions of stories similar to Cinderella. These versions can be found in different cultures and regions of the world, such as Ye Xian from China, Bawang Merah Bawang Putih from Indonesia and Malaysia, Tam Cam from Vietnam, Kongjwi and Patjwi from Korea, Maah Pishànih from Middle East, and European versions including the Italian version and the version told by the Brothers Grimm.

A highly themed street full of unique food and beverage joints and original souvenir shops is the introduction to the park’s overall experience.

This land of Magic Europe is inspired by European fairytales and stories. The narrow, richly decorated streets open on to a central plaza anchored by the main fairytale tower. Surrounded by meticulous and elaborate façades and details, small cafés and exotic shops,