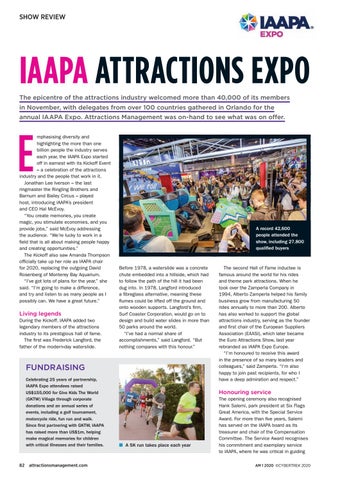 IAAPA AttrActIons ExPo The epicentre of the attractions industry welcomed more than 40,000 of its members in November, with delegates from over 100 countries gathered in Orlando for the annual IAAPA Expo. Attractions Management was on-hand to see what was on offer.

mphasising diversity and highlighting the more than one billion people the industry serves each year, the IAAPA Expo started off in earnest with its Kickoff Event – a celebration of the attractions industry and the people that work in it. Jonathan Lee Iverson – the last ringmaster the Ringling Brothers and Barnum and Bailey Circus – played host, introducing IAAPA’s president and CEO Hal McEvoy. “You create memories, you create magic, you stimulate economies, and you provide jobs,” said McEvoy addressing the audience. “We’re lucky to work in a field that is all about making people happy and creating opportunities.” The Kickoff also saw Amanda Thompson officially take up her role as IAAPA chair for 2020, replacing the outgoing David Rosenberg of Monterey Bay Aquarium. “I’ve got lots of plans for the year,” she said. “I’m going to make a difference, and try and listen to as many people as I possibly can. We have a great future.”

Living legends During the Kickoff, IAAPA added two legendary members of the attractions industry to its prestigious hall of fame. The first was Frederick Langford, the father of the modern-day waterslide.

Before 1978, a waterslide was a concrete chute embedded into a hillside, which had to follow the path of the hill it had been dug into. In 1978, Langford introduced a fibreglass alternative, meaning these flumes could be lifted off the ground and onto wooden supports. Langford’s firm, Surf Coaster Corporation, would go on to design and build water slides in more than 50 parks around the world. “I’ve had a normal share of accomplishments,” said Langford. “But nothing compares with this honour.”

FuNdrAIsINg Celebrating 25 years of partnership, IAAPA Expo attendees raised US$155,000 for Give Kids The World (GKTW) Village through corporate donations and an annual series of events, including a golf tournament, motorcycle ride, fun run and walk. Since first partnering with GKTW, IAAPA has raised more than US$1m, helping make magical memories for children with critical illnesses and their families.

The second Hall of Fame inductee is famous around the world for his rides and theme park attractions. When he took over the Zamperla Company in 1994, Alberto Zamperla helped his family business grow from manufacturing 50 rides annually to more than 200. Alberto has also worked to support the global attractions industry, serving as the founder and first chair of the European Suppliers Association (EAASI), which later became the Euro Attractions Show, last year rebranded as IAAPA Expo Europe. “I’m honoured to receive this award in the presence of so many leaders and colleagues,” said Zamperla. “I’m also happy to join past recipients, for who I have a deep admiration and respect.”

The opening ceremony also recognised Hank Salemi, park president at Six Flags Great America, with the Special Service Award. For more than five years, Salemi has served on the IAAPA board as its treasurer and chair of the Compensation Committee. The Service Award recognises his commitment and exemplary service to IAAPA, where he was critical in guiding AM 1 2020 ©Cybertrek 2020